It's really true: they know they are killing the babies.

Share to FacebookShare to TwitterShare to More476Share to Print 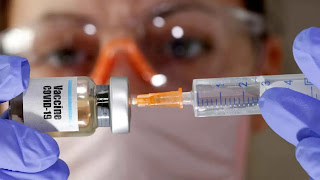 Bestselling author, columnist, and professor Dr. Naomi Wolf is a graduate of Yale University and received a doctorate from Oxford. She is cofounder and CEO of DailyClout.io, a successful civic tech company.Reprinted with permission from NaomiWolf.substack.com.

I’ve been silent for some weeks. Forgive me.

The truth is: I’ve been rendered almost speechless — or the literary equivalent of that — because recently I’ve had the unenviable task of trying to announce to the world that indeed, a genocide — or what I’ve called, clumsily but urgently, a “baby die-off” — is underway.

The WarRoom/DailyClout Pfizer Documents Research Volunteers, a group of 3000 highly credentialled doctors, RNs, biostatisticians, medical fraud investigators, lab clinicians and research scientists, have been turning out report after report, as you may know, to tell the world what is in the 55,000 internal Pfizer documents which the FDA had asked a court to keep under wraps for 75 years. By court order, these documents were forcibly disclosed. And our experts are serving humanity by reading through these documents and explaining them in lay terms. You can find all of the Volunteers’ reports on DailyClout.io.

The lies revealed are stunning.

The WarRoom/DailyClout Volunteers have confirmed: that Pfizer (and thus the FDA) knew by December 2020 that the MRNA vaccines did not work — that they “waned in efficacy” and presented “vaccine failure.” One side effect of getting vaccinated, as they knew by one month after the mass 2020 rollout, was “COVID.”

Pfizer knew in May of 2021 that 35 minors’ hearts had been damaged a week after MRNA injection — but the FDA rolled out the EUA for teens a month later anyway, and parents did not get a press release from the US government about heart harms til August of 2021, after thousands of teens were vaccinated.

Pfizer (and thus the FDA; many of the documents say “FDA: CONFIDENTIAL” at the lower boundary) knew that, contrary to what the highly paid spokesmodels and bought-off physicians were assuring people, the MRNA, spike protein and lipid nanoparticles did not stay in the injection site in the deltoid, but rather went, within 48 hours, into the bloodstream, from there to lodge in the liver, spleen, adrenals, lymph nodes, and, if you are a woman, in the ovaries.

Pfizer (and thus the FDA) knew that the Moderna vaccine had 100 mcg of MRNA, lipid nanoparticles and spike protein, which was more than three times the 30 mcg of the adult Pfizer dose; the company’s internal documents show a higher rate of adverse events with the 100 mcg dose, so they stopped experimenting with that amount internally due to its “reactogenicity” — Pfizer’s words — but no one told all of the millions of Americans who all got the first and second 100 mcg Moderna dose, and the boosters.

Pfizer skewed the trial subjects so that almost three quarters were female — a gender that is less prone to cardiac damage. Pfizer lost the records of what became of hundreds of their trial subjects.

In the internal trials, there were over 42,000 adverse events and more than 1200 people died. Four of the people who died,died on the day they were injected.

Adverse events tallied up in the internal Pfizer documents are completely different from those reported on the CDC website or announced by corrupted physicians and medical organizations and hospitals. These include vast columns of joint pain, muscle pain (myalgia), masses of neurological effects include MS, Guillain Barre and Bell’s Palsy, encephaly, every iteration possible of blood clotting, thrombocytopenia at scale, strokes, hemorrhages, and many kinds of ruptures of membranes throughout the human body. The side effects about which Pfizer and the FDA knew but you did not, include blistering problems, rashes, shingles, and herpetic conditions (indeed, a range of blistering conditions oddly foreshadowing the symptoms of monkeypox).

The internal documents show that Pfizer (and thus the FDA) knew that angry red welts or hives were a common reaction to the PEG, a petroleum-derived allergen in the vaccine ingredients — one that you are certainly not supposed to ingest. Indeed, PEG is an allergen so severe that many people can go into anaphylactic shock if they are exposed to it. But people with a PEG allergy were not warned away from the vaccines or even carefully watched by their doctors, EpiPen in hand. They were left to their shock.

Pfizer knew that “exposure” to the vaccine was defined — in their own words - as sexual contact (especially at time of conception), skin contact, inhalation or lactation. ‘Fact-checkers’ can deny this all they want. The documents speak for themselves.

Of course, people who have tried to raise any of these issues have been deplatformed, scolded by the president, called insane, and roundly punished.

Athletes and college students and teenagers are collapsing on football and soccer fields. Doctors wring their hands and express mystification. But BioNTech’s SEC filing shows a fact about which the CDC and the AMA breathe not a word: fainting so violently that you may hurt yourself is one of the side effects important enough for BioNTech to highlight to the SEC.

But not to highlight to you and me.

I was able to process all of this and keep simply reporting. But in the last few weeks the horror overcame me. Because now, the Volunteers, under the excellent leadership of Program Manager Amy Kelly, have confirmed that there is a genocide underway, intentionally driven or not. And Israeli journalist Etana Hecht has added her own superb analysis. Ms Hecht’s summaryof the Volunteers’ findings can be found HERE.

It seems that there can indeed be a happenstance genocide. Reproduction itself is targeted, intentionally or not, by the mRNA vaccines. And if you know that reproduction is harmed, and babies and fetuses are harmed, and you know that this is at scale, which everyone at Pfizer and at the FDA who read these documents, knew —and if you do not stop — then does that not ultimately become a genocide?

The WarRoom/DailyClout volunteers have confirmed that lipid nanoparticles, the tiny hard fatty casings that contain the MRNA, traverse the amniotic membrane. That means that they enter the fetal environment, of course. (They also traverse the blood-brain barrier, which may help explain the post-MRNA vaccination strokes and cognitive issues we are seeing). The Volunteers have drilled deep into the Pfizer documents’ reports about pregnancy and found that the assurance that the vaccine is “safe and effective” for pregnant women, was based on a study of 44 French rats, followed for 42 days (the scientists who ran the study are shareholders or employees of BioNTech).

The Volunteers found that while pregnant women were excluded from the internal studies, and thus from the EUA on which basis all pregnant women were assured the vaccine was “safe and effective”, nonetheless about 270 women got pregnant during the study. More than 230 of them were lost somehow to history. But of the 36 pregnant women whose outcomes were followed - 28 lost their babies.

The Volunteers found that a baby died after nursing from a vaccinated lactating mother, and was found to have had an inflamed liver. Many babies nursing from vaccinated mothers showed agitation, gastrointestinal distress, and failure to thrive (to grow), and were inconsolable.

I am hearing anecdotal reports of these symptoms in babies nursing from vaccinated mothers, now, from across the country.

The Pfizer documents also show that some vaccinated mothers had suppressed lactation, or could produce no milk at all.

Doctors, of course, are stumped by all this. Stumped.

The NIH database has a preprint studymaking the case that there are negligible amounts of PEG in the breast milk of vaccinated women.

But what is a negligible amount of a petroleum product in mother’s milk, when you are a tiny newborn with no immunities, just arriving in the world? The NIH preprint itself reported higher levels of GI distress and sleeplessness in the infants studied, and one mother had elevated PEG levels in breast milk, and the fine print concludes that more study is needed:

“Larger studies are needed to increase our understanding of transfer of PEG into human milk, and potential effects after ingestion by the infant. Although expert consensus states there is minimal or no potential risk for the infant from maternal COVID-19 vaccination (20,21), the minor symptoms that were reported (sleep changes and gastrointestinal symptoms) could be further investigated in future studies to determine if they are related to vaccination.”

Since no babies died in the brief time frame of the tiny study, the study concluded that nursing babies suffered no real ill effects from vaccinated mothers. But the study did not follow these poor babies, with their acknowledged sleeplessness and their confirmed GI distress, to see if they actually “thrived” — gained weight and developed normally.

On such faulty science were women assured that the vaccines were “safe and effective” for them and their nursing babies.

But — four of the lactating vaccinated women in the Pfizer documents reported “blue-green” breast milk. I am not making this up. And the nursing baby who died, with an inflamed liver — the case has been buried; has not made headlines.

Coincidentally — or not — the SAME FDA that turned a blind eye to vast harms to humans, and to the subcategory of moms and babies, in the Pfizer documents, declared that Abbot, a major producer of baby formula in the US, had to close its factory. [https://www.cnbc.com/2022/05/16/abbott-reaches-agreement-with-fda-to-reopen-baby-formula-plant-to-ease-nationwide-shortage.html]

Coincidentally, with little formula available and with some or many (we don’t know) vaccinated moms having compromised breast milk, it turns out that Bill Gates, Jeff Bezos, Richard Branson, and Mark Zuckerberg have all invested in a startup called "BioMilq” — which produces lab grown breast milk from mammary cells. Reports of this startup include this Frankenstein-like language as if this is normal: “The BIOMILQ team creates its product from cells taken from human breast tissue and milk, donated by women in the local community, who get a Target giftcard in return.”