For Nancy Pelosi, yet another decorous political junket to Rome and political manipulation of the Eucharist; “the Faith is a path to so many other things”, including abortion?

As I predicted, Nancy travelled yet again to Rome, and in repudiation of Archbishop Cordileone’s public instruction that she should not receive Communion, has defiantly  done so.

Of course, she enjoyed a political audience with Pope Francis as prelude to her political instrumentalization of reception of the sacramental Body of Christ at the Mass for Sts Peter & Paul in Saint Peter’s Basilica. 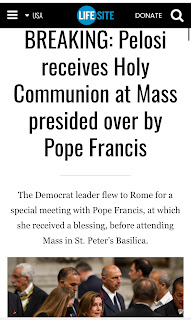 For Nancy Pelosi, yet another decorous political junket to Rome and political manipulation of the Eucharist. She is quoted saying “the Faith is a path to so many other things”. Her words and actions make clear she believes one of those things is premeditated murder of the preborn boy or girl in abortion.

The faith is a path to God. For Pelosi, unfortunately, her denial and distortion of the Faith won’t get her anywhere near the one goal and destiny for which it exists: heavenly beatitude with Him.

The pope preached a homily, and Cardinal Re presided, at the Mass today at which Pelosi desecrated the holy Eucharist. Details here: https://www.vaticannews.va/en/pope/news/2022-06/pope-francis-church-called-to-promote-culture-of-care.html