Cooperating with evil is evil 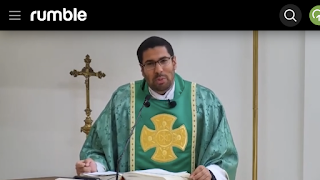 Posted by Father Kevin M Cusick at 6:57 AM No comments:

Just a reminder that the Internet is not your friend

Priests also use the Internet. 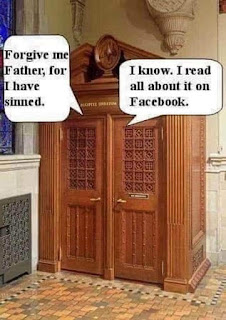 A blessed Lord’s Day to all.
Posted by Father Kevin M Cusick at 8:28 AM No comments:

The “Vaccine”: “they’re giving you the genetic material to build the spike protein in your body”

Dr Lee Merritt: “… it goes everywhere … in your system; it produces the actual pathogen in your system and then it can potentially, apparently, shed.”

Posted by Father Kevin M Cusick at 6:57 AM No comments:

Catholic Despite the Pope

The enemies of the faith have been hiding in plain sight all along. Now they have simply burst into the open in more obvious ways thanks to the internet and social media accessible in every home and on every cell phone.

What we see in the promotion of sodomy as “pride”, same sex simulation of marriage as “love” and abortion as “choice” on social media accounts and in online news sources is not a new reality. James Martin with 300k followers on Twitter is simply taking advantage to a large extent of a superficial social phenomenon of the attractiveness of transgressive behavior. Largely adolescent and by no means proven to be Catholic, these denizens of the virtual are capable of seeming monolithic until one posits the highly manipulable nature of virtual “reality”. It’s not real.

For one example of the untrustworthiness of the internet, anyone with online access and an email account can create multiple fake accounts. One can buy bots which appear to be  “followers”.

What is real are the young 20- and 30-something Catholics coming to weekday adoration and holy Mass. What truly matters are the families and elders who attend each Sunday at my parish and remain for lunch together every week. These are the real numbers of God. They cannot and probably will not ever be measured by the social media mavens. But in the perspective of what is real, of God and eternal life, they truly matter.

And these numbers continue to grow as the last vestiges of a new Catholic reality promised and seemingly built up in the 60’s is torn down piece by piece. This is being done by the enemies of the Church in high places, abetted by their agents on the ground who have weaseled their way into the power structures enabled by the modernization of the Church built on a mundane model.

Souls are waking up as the illusions fomented in recent years are shattered and the traditional Faith is revealed as the perennial source of unity in Christ. The promise of something new and better “Catholic” is now revealed to be a plan for its destruction.

Eternal life with God matters. When we follow our Faith and put that first, because it truly lasts, our perspective on the superficialities, the appearances of this world, takes on its true value. That which cannot last must not have value for us.

There is a constituency for gutting the Faith of its difficult teaching, especially in areas of sexuality and human life, that has been in place for a long time and will be with us for a long time. It’s simply the result of free will and the concupiscence remaining after Baptism. The Lord Himself was undermined and betrayed by such troubled and tempted souls.

There is a plan afoot among the enemies of the Catholic Church to make it unrecognizable from other religions. Or make one world religion. The Abrahamic House in Abu Dhabi, a project of the pope, after his document on the same theme, is one example.

At the same time that Francis seems to be promoting everything but the Catholic Faith to the outside world he excoriates Catholics who believe in the teachings and teach others to follow them. Especially seminarians and priests.

It is deeply disturbing to observe the manner in which he uses the papacy to wage a verbal war against young men in the seminary who are orthodox, that is, hold to the teachings of the Faith and morals as enunciated in the Catechism and papal documents previous to Amoris Laetitia. He assails them as “rigid”. This was a shallow tactic used by modernists in my time in the seminary.

Any man who believed in truth, which by its nature cannot be changed, was seen as some kind of “danger” and in some cases systematically rooted out. This is one reason why the enemies of the Faith have been hiding in plain sight for many years, long before Francis. They have planted themselves in positions of power in chanceries, seminaries, colleges and parish staffs all over this country.

Francis’ true intentions behind the footnote in the previously mentioned letter is clear. The poison in the pie, giving the Eucharist to faithful in mortal sin due to adultery, is part of a grand plan to attempt to permanently alter the Faith itself. Catholics who believe in the teachings stand in the way. For the longest time now many of us who were Catholic, or who were better Catholics, because of the pope now have to learn to be Catholic despite the pope.

People will either know the Faith better because they’ve had to debunk so many erroneous sounding utterances or will fall victim to his deceit and receive Communion uselessly and sacrilegiously like so many Bidens or disgruntled baptized Catholic proabortion/sodomy leftists who show up at special church events to run everything, demanding they’re reading the Scriptures at funerals and marching up self-righteously to demand Communion at weddings and funerals as though they’re just as Catholic as Mother Teresa.

Will anyone else share responsibility for their damnation after they’ve blithely lived as though everybody goes to the same place after they die? Certainly the prime leader of the Church and among Christians who refuses the title “Vicar of Christ”.

The man seems to lack humility, changing the Lord’s Prayer as he does, kneeling to kiss the feet of African leaders or wash Muslim feet on Holy Thursday while refusing to do so each time he says holy Mass for God Himself truly present in the Eucharist. It seems that everything is ridiculously venerated except the Faith and the Lord Himself, a hallmark of the modernist heresy.

The true disciples and lovers of the Lord do not confirm sinners in their error but rather imitate Christ by patiently teaching the truth in true Christian accompaniment. Catholic parishes everywhere led by priests of the true Faith offer this authentic charity of accompanying love. Souls thirsting for Christ respond to His presence and life in the Catholic parishes which defend our traditional holy Faith.

The faithful have awoken and are now fighting to take back our Church. The inspiring sight this month of parishioners guarding their pastor around the clock to defend him against the unjust abuse of a bishop, who summarily ordered him to vacate his rectory without recourse to the procedures outlined in canon law, inspires and galvanizes all of us everywhere who keep the Faith.

Thank you for reading and praised be Jesus Christ, now and forever.

Posted by Father Kevin M Cusick at 2:31 PM No comments: