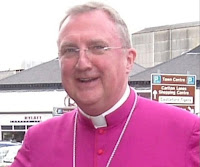 There’s never been such a strong controversy over the liturgy as today and this is a "tragedy," Neo-Cardinal Arthur Roche, Prefect of the Liturgy Dicastery, Francis' liturgical warmonger, feigned speaking to VaticanNews.va (June 16).
He claimed that the [failed] 1970 missal was produced "with the full force" of Vatican II - but this is not true as Vatican II produced its own 1965 missal which was quickly discarded by Paul VI.

Roche calls the outdated 1970 liturgical "reform" "very important," not only "an option," and resistance to it is for him "quite a serious matter."

He explains that Traditionis Custodes aims at "stopping" the promotion of the Roman Rite, because - as he mystifies - "it was clear that the Council, the Bishops of the Council, under the inspiration of the Holy Spirit, were putting forward a new liturgy [sic!] for the vital life of the Church, for its vitality.” The truth: The Council Fathers never approved of the Novus Ordo.

Instead, the Church's vitality collapsed with the Novus Ordo that never was a true rite but a multitude of empty do-it-yourself ceremonies which are producing a liturgical confusion to the point that groups celebrating the Novus Ordo according to Paul VI's books are persecuted by the Vatican.