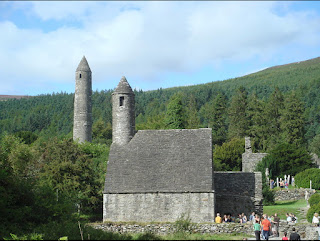 The site in the Wicklow Mountains associated with my heavenly patron is studded with 12th century oratories, a round tower, and churches, a monastic city straddling the “valley of the two lakes” which sprang up beginning in the 6th century where Saint Kevin sought solitude with the Lord. The cave where he slept was dubbed “Saint Kevin’s bed”. (Photo credit Wikipedia.)

If you’re up for more reading here’s a bio:

Coemgen or, as his name is written at present, Kevin, (147) was of an illustrious family in the territory of Tirtuathal, the country of the O'Tooles, His father's name was Coemlog; and his mother, who was of the princely house of Dal Messincorb, was called Coemella. (148) They were Christians, whereas we find it related that Coemgen was, when a child, baptized by Cronan a priest. (149)

At the age of seven years he was placed under Petrocus a learned and holy Briton, with whom he remained for five years. (150) Being now twelve years old his parents consigned him to the care of three holy elders Eogan, Lechan, and Enna, to be educated by them in their monastery or  school, in which he applied himself diligently to his  studies during three years. (151) Next it is said that he became a disciple of Beonanus a hermit, and afterwards of a bishop Lugidus, who ordained him priest. (152) By the advice of this bishop he is said to have founded a monastery for himself at a place called Cluain-duach. (155) Then leaving some of his monks there he repaired to his own country, and formed his chief establishment at Glendaloch, (154) whence in his time or afterwards were derived several other religious houses in Leinster.

At what time that monastery was founded is not recorded; but it must have been before A. D. 549, if it be true that he was abbot there when he went to pay a visit to Kieran at Clonmacnois, where he did not arrive until three days after Kieran's death. (155) It is related that on a certain occasion he visited also the three holy abbots Columb, Comgal, and Cainnich, then assembled at Usneach in Meath. (156) Having well arranged the order and discipline of this institution at Glendaloch, he retired (at what period of his life is not mentioned) to the upper part of the valley about a mile from the monastery, and there in a small place, beset with thick trees and refreshed by rivulets, led the life of a hermit for four years, practising the greatest austerities, until at length his monks prevailed on him to return to the monastery. (157) It is said, that when far advanced in years he intended to undertake a long journey, but was dissuaded from so doing by Garbhan a hermit, (158) who told him "that it was more becoming for him to fix himself in one place than to ramble here and there in his old age, as he could not but know that no bird could hatch her eggs while flying."

On his end approaching he received the holy viaticum from St. Mochuorog a Briton, who had a cell to the east of Glendaloch. (159) St. Coemgen died on the 3d of June A. D. 618. (l60) Although this saint was most probably not a bishop, yet Glendaloch became not long, it seems, after his death an episcopal see, in consequence of a city having soon grown up near the monastery. (161) Some writings have been attributed to him, but except perhaps a monastic rule, without sufficient authority. (162) How great the reputation of St. Coemgen has been appears from the vast concourse of persons, who for many centuries have continued to repair on the anniversary of his death to Glendaloch, there to celebrate his festival. (l63) 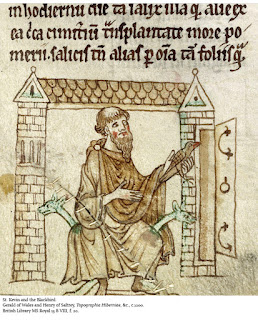 Saint Kevin depicted with the black bird reputed to have nested in his hand.