The Great Disrupter: Man is not the "Lord of Marriage"

Laws heaped from earth to heaven and beyond will never make what is not marriage to be marriage.

We recently learned that the Department of Justice, at the direction of "higher ups", will no longer defend the constitutionality of marriage as we know it.

This colossal failure born of a profound lack of moral conviction, and the timidity which is its symptom, is merely a sign of the times.

The pride with which man speaks as if he is the "lord of marriage", however, is a hubris of a completely new species. Never before has man or woman used the law, to impose by fiat a simulation upon everyone and madly insist that all, under force of law, act, think, speak or otherwise live as if the simulation and the reality which it mimics are exactly the same thing. This is what the law and those who create it now propose to do with the particular bodily expression of love that is given only to man for woman and to woman for man for the sake of the life they form together as a covenant around this particular love only they can share and the children with which they may be blessed as cooperators with God.

But man will use the law to compel others to conform to his mad follies. And thus there are prisons and those who are thrown into them for witnessing to the immemorial truths of natural moral law and fundamental justice.

First they said human life in the womb was unconstitutional through legalized abortion. Now they declare marriage undefendable.

When will they declare you and me unconstitutional? And, when they do, will there be anyone left to stand up for us?

And I say this again: Catholics and other Christians who use the word "marriage" or "wedding" to describe what is NOT so, what is a simulation of marriage or an unnatural union, are opposers of the truth! They are opposers of Christ and His Church!

Time to overwhelm the Senate! 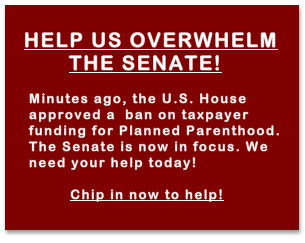 Your calls and your prayers worked! Planned Parenthood is hysterical.

Moments ago the U.S. House passed the Pence Amendment 240-185 ending federal funding for Planned Parenthood through the end of the year (don't worry, a permanent end to their funding is around the corner!).

This is a giant victory. But don't celebrate yet.

Once approved, the "Continuing Resolution" will head to the Senate where the votes needed to approve the Pence language are hanging by threads.

Chip in $10 today to help us put the heat on the Senate!

The momentum is on our side. Legislators are fired up and acting with courage. The majority of Americans – Republicans and many Democrats - are with us.

But the abortion lobby is preparing to pounce on the Senate. Think about it – they have over $360 million annually at stake!

Planned Parenthood will throw every dollar they have at the Senate to save their taxpayer-funded money line. They are opening new clinics everywhere – including massive abortion supercenters in Illinois and Houston and elsewhere – knowing that taxpayers will pick up the tab.

Whatever funds we raise will be turned into radio, Internet and a massive grassroots lobbying campaign to fight for this legislation in the Senate. Many of the "swing votes" in the Senate are up for re-election in 2012, and they know this issue could decide their future.

The Senate knows this legislation must be passed quickly or the government could be shut down.

Building a Culture of Life is difficult enough; the least we can do is stop sending our money to those fighting against us.

Before you do anything, please take a few seconds and say a prayer of thankgiving for today's vote. And pray for continued success as we head to the Senate.


P.S. Question: Who is the biggest annual donor to Planned Parenthood? Answer: WE ARE! But that could end if we act now. The House has voted to put a stop to this outrage. Now the Senate must do the same.

We need your help to fund a massive campaign to put the pressure on the Senate.

Home
Most Holy Father, we the undersigned:
1. Express our profound gratitude to Your Holiness for your personal liturgical example to the Universal Church. You are a true homo liturgicus whose love for the sacred liturgy is an inspiration; it teaches more clearly than words the centrality of the liturgy in the life of the Church.
2. Thank Your Holiness for your gift to the Church of your 2007 Motu Proprio Summorum Pontificum. Since 2007 it has brought forth many fruits, including greater unity in the Church of Christ and a widespread enrichment of the liturgical life of the Church.
3. Note with sadness the continuing and real opposition to the implementation of Summorum Pontificum in many dioceses and on the part of many members of the hierarchy, the suffering and distress this continues to cause many of Christ’s faithful and the obstacle this opposition is to an effective reconciliation within the Church.
4. Note with anxiety the apparent signs that a forthcoming Instruction on Summorum Pontificum will, in some way, take away from what you have legally established in that Motu Proprio and from its wide application in the generous spirit so eloquently explained by Your Holiness in the letter accompanying it: “Let us generously open our hearts and make room for everything that the faith itself allows.”
5. Express our grave concern that any restrictive measures would cause scandal, disunity and suffering in the Church and would frustrate the reconciliation you so earnestly desire, as well as impede further liturgical renewal and development in continuity with Tradition, which is already so great a fruit of your pontificate.
6. Express our hope, our desire and our urgent appeal that the good Your Holiness personally initiated through Summorum Pontificum not be allowed to be hindered by such restrictions.
7. Turn to you with filial trust and as obedient sons and daughters, Most Holy Father, and ask that you urgently consider our concerns and intervene if you judge it necessary.
8. Assure Your Holiness of our continuing prayers, of our deep affection and of our loyalty.

Note: Please ignore the donation page that may come up after you sign. Just close it. Your vote will have already been recorded and any donation does not come to the Motu Proprio Appeal.

(See Signatures)
Posted by MCITL at 10:48 AM No comments: 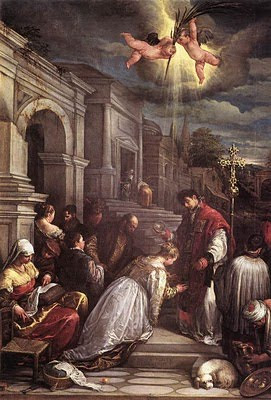 ... intercede for us with God that all the world may come to know, believe and live the truth and beauty of the particular love that is given, body and soul, only to man for woman and woman for man.