Including priests and servers on the altar there were a total of about 50 faithful in attendance for the annual Memorial Mass at Old Saint Mary's Church in DC on Friday, January 29th for the heroic founder of the March for Life.

In previous years, since the Mass was first initiated for the repose of Gray's immortal soul, the church is typically packed to overflowing on the afternoon of the annual March for Life.

Gray's successors in leadership of the March decided to cut the attendance down this year by encouraging the thousands who typically come to DC every year to stay home for a COVID-stylr virtual experience.

The remnant are on guard, nonetheless, protecting and handing on our Faith in these dark days, in one of the darkest places in our country, due to hostility against the Church and the most defenseless human lives in the womb. 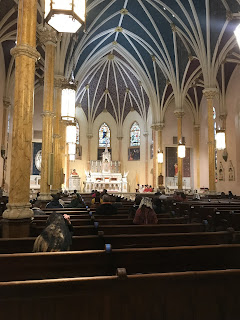 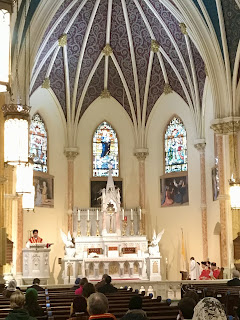 Nothing posted yet. Front page only. Stay tuned.

US Bishops’ Statement on Biden: “our new President has pledged to pursue certain policies that would advance moral evils and threaten human life and dignity, most seriously in the areas of abortion, contraception, marriage, and gender.”

“... our new President has pledged to pursue certain policies that would advance moral evils and threaten human life and dignity, most seriously in the areas of abortion, contraception, marriage, and gender. Of deep concern is the liberty of the Church and the freedom of believers to live according to their consciences.“

A psalm for Inauguration Day: “The fool said in his heart: * There is no God.“

Ant. For thy mercy, O Lord, is before my eyes; and I am well pleased with thy truth.

52:1 The fool said in his heart: * There is no God.
52:2 They are corrupted, and become abominable in iniquities: * there is none that doth good.
52:3 God looked down from heaven on the children of men: * to see if there were any that did understand, or did seek God.
52:4 All have gone aside, they are become unprofitable together, * there is none that doth good, no not one.
52:5 Shall not all the workers of iniquity know, * who eat up my people as they eat bread?
52:6 They have not called upon God: * there have they trembled for fear, where there was no fear.
52:6 For God hath scattered the bones of them that please men: * they have been confounded, because God hath despised them.
52:7 Who will give out of Sion the salvation of Israel? * when God shall bring back the captivity of his people, Jacob shall rejoice, and Israel shall be glad.
V. Glory be to the Father, and to the Son, * and to the Holy Ghost.
R. As it was in the beginning, is now, * and ever shall be, world without end. Amen.
Ant. For thy mercy, O Lord, is before my eyes; and I am well pleased with thy truth.
Psalm 52
Posted by MCITL at 9:54 AM No comments:

Nancy Pelosi, the abortion queen who has amassed wealth and power for many years through legalized child murder, finally admits that the four-year war against Donald Trump was all about abortion:

“Pelosi On Religious Americans: ‘Willing To Sell The Whole Democracy Down The River’ Over Abortion”

What kind of “freedom” does democracy preserve if it does not preserve the freedom to defend every human life without exception? No freedom at all.

When a Catholic pounds on the sacristy door after Sunday Mass and begins an outburst by blurting out something about divorce with tears in their eyes it may be politics, and not personal, as was my experience recently.

The man, though clearly in distress, was not sharing something personal, I soon learned much to my relief, but I was chagrined that his purpose in launching on the subject was an attempt to compare and contrast two politicians.

He was bringing up divorce in the case of a prolife politician. No dice: in our Catholic calculus the broken marriage of one politician doesn’t outweigh the desire to support murder on the part of another politician in the scale of comparison between the two.

And it led me to think that, if you’ve begun to agree with spin doctors and leftist talking heads that divorce is worse than support for abortion or discounts a right to participate in our political life, you may have lost your mind as well as your faith.

60% of the population is now divorced: that would discount a lot of people from running for office and would require the removal of a number of people currently in office.

Yes, divorce can be a sin, but it isn’t a crime that calls out to heaven for vengeance like continuing support for abortion during all nine months of pregnancy, and in some cases after birth, which amounts to infanticide.

Someone who is ProLife now can repent of a past divorce. That is all the Lord asks.

If you no longer grasp this basic distinction between these two human issues then you have been brainwashed by those who have absolutely nothing in common with our Catholic faith and, at the same time, with the truth.

Even some sanity broke through the fog of confusion affecting even our bishops’ conference last November when they were willing to re-state the truth that abortion is the “preeminent issue”. Fighting legal child murder, aka abortion, and overturning Roe v. Wade, continues to a primary concern for all Catholics who wish to be so in good standing.

While on the subject of abortion, the March for Life is not an opportunity for self-selected so-called “Catholic pro-life leaders” to promote themselves by canceling the March for everybody else and then showing up themselves for a photo opportunity. That is very far from the intention of Nellie Gray in founding the March.

Canceling the March when people on the left are given carte blanche to gather in public at the same time is setting a very dangerous precedent. Catholics and others of good will should push back against being canceled - we need to push back against the cancel culture by showing up, now more than ever.

Agreeing not to gather in peaceful protest begins a process on a continuum that under our cancel culture leads inexorably to further and further silencing.

We will have wait until next year to find out if these “leaders” end up killing off the nation’s number one peaceful protest for Life.

Submitting our necks to the yoke of the cancel culture is not leadership at all. And it’s not following the Lord either.

I’m on gab @FatherKevinMCusick and blogging at http://apriestlife.blogspot.com while waiting for Parler to come back online.

The family and the Church are the default “social networks” by God’s grace, providence and holy will. Invest and participate in these more intensely during these days of persecution.
Link:
https://gab.com/FatherKevinMCusick/posts/105549575001858322
Posted by MCITL at 1:44 PM No comments:

The logical end of mocking God

... denial of the Incarnation. The definition of antiChrist.

The purported image of Jesus has been covered. No more eloquent commentary on this year’s disaster of a Vatican Nativity scene is possible. 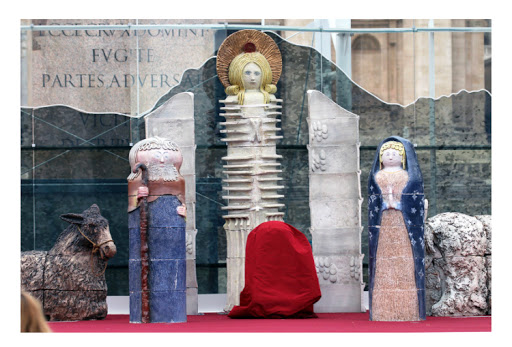 So what happens now when a man who thinks he’s a woman wants to serve at Mass in the sanctuary as a “woman”?

So what happens now when a man who thinks he’s a woman wants to serve at Mass in the sanctuary as a “woman”?

I think we all know how that will go ... the Catholic schools are already local franchises of LGBT International.

Big tech is trampling on the God-given rights of all Americans when they choose whose voices will or will not be silenced. Taking away the voice of some is favoring the voices of those who oppose the freely chosen opinions or principles of others. Truly free speech, absence of censorship based on favoring only certain political opinions or religions, is a guarantee of human freedom itself.

If man is not free then God Who made him thus is denied and disobeyed.

We have been brought to the precipice of tyranny. Everyone must now speak out using every means still available to them.