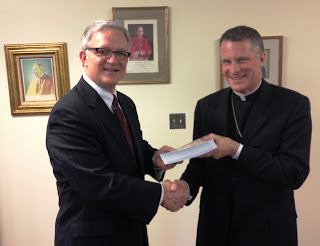 
The Catholic Bible contains a guide for practicing Lectio Divina—Latin for “divine reading”—a Benedictine tradition of Scriptural reading, meditation, prayer, contemplation and action, as well as the three-year calendar cycle of Sunday Mass readings, a weekday lectionary and collection of Catholic prayers and spiritual devotions including the Hail Mary, Glory Be and Act of Contrition. Publication rights for the revised New American edition were secured through the United States Conference of Catholic Bishops (USCCB).This new military Bible also features the highlighted “Essential 100” passages—50 in the Old Testament and 50 in the New Testament—composing a simple introductory reading plan for those trying to gain a better grasp of the “big story” of God’s Word by tracing the history of salvation. American Bible Society offers a Challenge Coin for anyone who meets the “Essential 100 Bible Reading Challenge:” reading all 100 passages in 100 days.

Also included are letters from His Excellency, the Most Reverend Timothy P. Broglio, J.C.D., Archbishop for the Military Services, and Dr. S. Douglas Birdsall, American Bible Society President and CEO. It was in response to a request from Archbishop Broglio that American Bible Society decided to publish the volume. The Archbishop expressed his desire for a Catholic version of the Good News and English Standard military Bibles that the Society has published for years. Dr. Birdsall presented the first copy to Archbishop Broglio on Monday at the chancery of the Archdiocese for the Military Services (AMS).

Archbishop Broglio said: “Ever since Pope St. Damasus commissioned St. Jerome to translate the Bible from the Hebrew and Greek texts into Latin in the 4thCentury, the Church has toiled to put Scripture into language that can be understood by people the world over. Consequently, the desire to put this special edition of the revised New American Bible in the hands of our men and women in uniform is merely another stop in the constant desire of the Catholic Church to nourish her sons and daughters with the Word of God. I hope all those who take this volume in their hands will be consumed and filled with enthusiasm for the presence of his Kingdom known among the men and women of our time.”

Dr. Birdsall said: "It is a privilege to partner with the Archdiocese for the Military Services to help provide this full-resource Bible for millions of Catholic men and women in our American military family. What an honor to give something back to those who have given so much, servingour nation so well.”

American Bible Society has printed an initial 10,000 copies of the new Catholic military Bible, two-thousand of which are already being sent to the United States Military Academy at West Point. Additional copies are available for military ministry leadership while supplies last at Provisions@AmericanBible.org or on the Website of the Armed Services Ministry of American Bible Society at www.ArmedServicesMinistry.com.
Posted by Father Kevin M Cusick at 7:52 PM No comments: 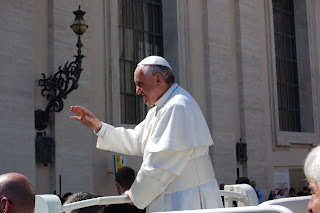 (Vatican Radio) Pope Francis has appointed a group of eight cardinals to advise him in the governance of the Universal Church. In a communique issued Saturday the Secretariat of State announced that the Holy Father decided to set up the Group following on from discussions that emerged during the General Congregations in the lead up to the Conclave which elected him the 265th Successor to St Peter.

The group of Cardinals will be co-ordinated by Card. Oscar Andrés Maradiaga Rodríguez and is drawn from across the Universal Church. It will also help Pope Francis revise the Apostolic Consitution on the Roman Curia Pastor bonus.

The first meeting of the Group will take place October 1-3, 2013. Pope Francis however is already in contact with all of the above mentioned Cardinals.

Photo: MCITL
Posted by Father Kevin M Cusick at 6:32 AM No comments:

During an Easter Sunday appearance on a nationally televised news program, Cardinal Donald Wuerl was asked how the Catholic Church responds to Catholic homosexuals who attend Mass and seek to be part of the life of the Church. Cardinal Wuerl responded by saying that the Church welcomes everyone and tries to walk with them on life’s journey while, at the same time, upholding a moral law by which we are all obligated to live. He also expressed his concern that, in light of efforts to change the definition of marriage, there will be pressure to label the Christian belief in marriage and sexual morality as bigotry or hate speech. He called for tolerance and respect among all people. “There has to be room enough in a society as large, as free and as pluralistic as America, to make space for all of us,” he said.

Recent events on the campus of the George Washington University (GW) suggest that the Cardinal’s concerns are well-founded.

According to reports in the student newspaper, The Hatchet, two students who identify themselves as homosexual have embarked on a campaign to silence and remove the Catholic chaplain, Father Greg Shaffer, for simply teaching the tenets of the Catholic faith on sexual morality and the right to life. Since 2009, Father Shaffer has served as chaplain at the Newman Center there, a place for
Catholic students and those interested in learning more about the Catholic faith, to attend Mass and participate in other religious activities and discussions. Judging from multiple accounts – including those shared on a student-initiated blog, “The Chaplain We Know” – Father Shaffer is a welcoming presence on campus, and his ministry has inspired a deeper appreciation for the faith among the students, Catholic and non-Catholic alike.

In addition to their efforts to force Father Shaffer off campus, the two students who have filed a complaint against the Catholic priest with the university’s administration have demanded that GW initiate an approval process for determining who may serve in Catholic ministry there. What they are essentially asking is for
the university to sit in judgment of Catholic teaching.

The radical intolerance of this effort to dictate what a particular religious group may and may not teach – and how students of a particular denomination may practice their faith – should concern all of us. Any university worth the name should not engage in this style of thought control. Today, we face an increasingly aggressive movement in our culture which seeks to marginalize people of faith and diminish the role of religion in society. This has become increasingly true for the Catholic Church, in particular, including individual Catholics who strive to live and express their faith in the public square.

It should never be acceptable – and certainly not at a university – to silence opposing views. The spurious claim that people who voice the Church’s teachings on moral truth and the nature of the human person engage in hate speech should never be used as justification for attempts to silence and exclude from public life religious institutions and people of faith. Sadly, the GW case is only the latest example of this phenomenon. This type of censorship of religious ministers and their beliefs and teachings is contrary to the principles of fundamental liberty that our nation has historically valued and for which George Washington himself fought.

It is important to affirm that the Catholic Church is and always will be welcoming of any person who seeks a deeper relationship with Jesus Christ. We are called to live and to share the truths of our Catholic teaching, and to do so with love. According to the many students who have spoken out in Father Shaffer’s defense – including those who do not embrace all of the Church’s teachings – he has demonstrated this through his ministry. “Through Father Greg I met God’s love and forgiveness,” says one person who initially took exception to him defending the Church’s teaching.  “Father Greg’s kindness changed my life. . . . I still don’t fully agree with or understand all of the teachings from the Church, but I will always stand for Father Greg, because I know that he would never disrespect or discriminate against anyone based on his or her beliefs….[H]e is the most compassionate non-judgmental person that I have ever met.” Another writes, “Father Greg is one of the holiest, kindest, most devoted priests I have had the privilege to meet.” Indeed, there has been a marked increase in Catholic students’ participation at the Newman Center during his tenure, and the sacramental life has been greatly expanded.

Those who are in positions of authority, including in higher education, should resist the increasing demands to silence the voices of faith or to otherwise assert control over the Church’s ministries on campus and in the world. In our country, there should be room for all of us to live our faith freely. The Church not only has the fundamental religious liberty to engage in the public
square, but by doing so, we contribute greatly to the common good – as Americans, and as people of faith.