Posted by Father Kevin M Cusick at 8:25 AM No comments: 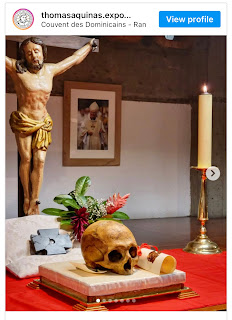 My latest column: “New Book By Ganswein On BXVI“

Upon his death we shared the witness that Pope Benedict lived out the words he uttered. Archbishop Georg Ganswein’s book Nothing But the Truth recounting his life with the great Pope is now out in bookstores. Here I share some vignettes of that volume from an advance unofficial English translation.

In October 1978 the future Benedict XVI shared the following words at a Munich requiem for John Paul I, sentiments which, the world would soon witness, he himself lived.

“The only greatness in the Church is to be saints. And her saints are the pillars of light that show us the way. Henceforth he too will be a part of these lights. And from what was granted to us for only thirty-three days emanates a light that can no longer be taken away from us.”
To George Weigel, biographer of JPII, he confided this concerning the conclave resulting in the election of JPI:

Later from Ratzinger we gained this insight:

“Luciani’s election was not a mistake. Those thirty-three days of pontificate had a function in the history of the Church. That sudden death also opened the door to an unexpected choice. That of a non-Italian Pope. In the previous Conclave this was also discussed. But it was not a very real hypothesis, also because there was the beautiful figure of Albino Luciani. Later it was thought that something absolutely new was needed.”

Though all too brief, the reign of JPI served to set the stage for the first non-Italian Pope in many years.

Though both were involved through preparation or participation in the deliberations of Vatican II they did not meet in that context. The future JPII had encountered the future BXVI, as have so many others, through his writing and, what’s more, had valued his wisdom so greatly that he, as Ratzinger recollected, drew from the latter’s work while preaching a retreat for a previous Pope.

“Of course, I had heard of his work as a philosopher and pastor, and I had long wanted to know him. For his part, he had read my Introduction to Christianity, which he had also quoted at the spiritual exercises he preached for Paul VI and the Curia in Lent 1976. So it is as if inwardly we were waiting to meet.”

The newly elected JPII almost immediately called on Ratzinger to assist him in the administration of the Church at Rome but the archbishop of Munich-Freising begged off, claiming a need for more time as a yet fairly new father to his flock in Germany. JPII demurred, choosing Cardinal Baum of Washington for the role of prefect for the Congregation for Catholic Education while making clear his intention to renew his request at the next opportunity.

Later Ratzinger would agree to come to Rome and work for JPII if he could continue to write and publish theology under his own name. JPII concurred and the two were to become close collaborators for many years.

Posted by Father Kevin M Cusick at 9:05 AM No comments: An OB-GYN and medical researcher urged the U.S. Food and Drug Administration to reverse course on its decision to end in-person medical supervision for abortion drugs after a new report warns emergency room doctors to watch for potentially life-threatening undetected ectopic pregnancies.

Dr. Ingrid Skop, an OB-GYN for more than 25 years and a senior fellow with the Charlotte Lozier Institute, spoke with the Christian Post this week about how dangerous abortion drugs can be for pregnant mothers as well as their unborn babies, especially if taken without medical supervision.

In late 2021, the Biden administration got rid of a requirement that the abortion drug mifepristone be provided to women in person by a medical professional. Now, abortion businesses are selling abortion drugs through the mail without ever seeing the woman.

Many doctors and pro-life leaders warned that this decision would put unborn babies and mothers at an increased risk. Then last week, The New England Journal of Medicine published an article urging emergency room doctors to watch for ectopic pregnancy signs in patients who come in after taking abortion drugs.

One of the many problems with removing the in-person supervision requirement is that the effects of the abortion drugs and symptoms of an ectopic pregnancy are similar, Skop continued.

Posted by Father Kevin M Cusick at 5:52 AM No comments:

Benedict XVI, man of great intellect and learning that he was, lived the radical truth that faith, the direct graced contact with God, must be the starting point for all theological inquiry. Dating back to Augustine and Anselm of Canterbury (c. †1033-1109), the phrase “faith seeking understanding” is first mentioned by the latter in his Proslogion. It was this conviction which set up the great conflict with modernist and heretical forces within the Church.

Just as the physical came from the spiritual in Creation, and God existed before all He has made, so we must proceed in all inquiry beginning with God. Perceived and grasped through graced belief, an abiding trust in all His words and actions, is the starting point for all rational questioning and exploration of any matters relating to the Divine.

I have been parsing an advance copy in rough English translation of the new book by Archbishop Georg Ganswein, Nothing But the Truth. In the first chapter of the book Ganswein brings up this matter of theological method in connection with the elevation of the great theologian Ratzinger by Paul VI to the cardinalate, along with three others. He quotes the words of the Pope at the event:

“In his speech for the occasion, Paul VI explained that the main endowment of the newly ordained cardinals was ‘the absolute fidelity that has been lived by them, in this postconciliar period rich in healthy ferments but also in disruptive elements, in a continuous availability in a diuturnal service, in a total dedication to Christ, to the Church, to the Pope, without flexing, without wavering,’ specifying for Ratzinger that his ‘high theological teaching in prestigious university chairs in Germany and in numerous valuable publications made us see how theological research — in the high road of “fides quaerens intellectum” — cannot and must never be separated from the profound, free, creative adherence to the Magisterium that authentically interprets and proclaims the Word of God’.”

As a sign of confidence in his gifts, Paul VI in 1975 had already invited Ratzinger to preach the spiritual exercises in the Vatican. However, with his typical humility, Ratzinger declined. Ganswein quotes him, “I did not feel confident enough in either my Italian or my French to prepare and dare such an adventure, and so I had said no.”

Ratzinger always found the faith and truth together and never wavered from that conviction of trust in the Lord. His episcopal motto chosen, after his March 25, 1977 appointment at 49 as archbishop of Munich and Freising, makes this evident. Again, from Ganswein: “When it came to choosing the motto for the episcopal coat of arms, there was a significant development, with the choice of verse 8 of the third letter of St. John: ‘Collaborators of the truth’ (Cooperatores veritatis). In his autobiography, he motivated it as a desire to ‘represent the continuity between my previous task and the new assignment: even with all the differences, it was and always is about the same thing, to follow the truth, to place oneself at its service. And since in today’s world the topic ‘truth’ has almost disappeared, because it seems too big for man, and yet everything collapses, if there is no truth, this episcopal motto seemed to me the most in line with our time, the most modern, in the good sense of the word’.”

Posted by Father Kevin M Cusick at 6:25 AM No comments:

The Archdiocese for the Military Services today sent out a notice in regard to a new revised order of penance:

Please remember that the new rite for the sacrament of penance may be used beginning on Ash Wednesday (22 February) and is obligatory from Divine Mercy Sunday (16 April) onward.

Four editions are available for purchase:

Several media reports have published an incorrect version of the revised prayer of absolution.  The approved version does not include the words “among us”, but reads:

God, the Father of mercies,

through the Death and Resurrection of His Son

has reconciled the world to Himself and poured out the Holy Spirit for the forgiveness of sins; through the ministry of the Church may God grant you pardon and peace.

AND I ABSOLVE YOU FROM YOUR SINS, IN THE NAME OF THE FATHER, AND OF THE SON, + AND OF THE HOLY SPIRIT.

(N.B. What is there that doesn’t change now, except the tradition? Once again, it is the traditional order of penance that remains unchanged. This while everything else in the Church seems to undergo nearly constant change. Ongoing, permanent revolution.)

Posted by Father Kevin M Cusick at 2:34 PM No comments:

A bishop has authorized and published a prayer for private devotion to Pope Benedict XVI, who died Dec. 31, 2022, at the age of 95 in Rome.

Bishop Carlos Rossi Keller of the Diocese of Frederico Westphalen in the Brazilian state of Rio Grande do Sul published the prayer in Portuguese, Spanish, French, and Italian.

“As children of the Church we must pray and ask God for his eternal rest in heaven,” the prelate said in sharing the prayer in Portuguese on his Facebook page.

“But as testimonies of his generous dedication to God and knowing that his last words were ‘Lord, I love you,’ we can also privately ask for his intercession,” Bishop Rossi explained.

In his post, the prelate stressed that “in accordance with the decrees of Pope Urban VIII, we declare that in no way is it intended to preclude the judgment of the ecclesiastical authority and that this prayer has no purpose for public worship.”

The bishop likewise noted that the graces attributed to the intercession of Pope Benedict XVI must be communicated to the Vicariate of Rome, with a letter written to the following address:

His Eminence Cardinal Vicar for the Diocese of Rome

The prayer for private devotion:

Eternal and Almighty God, who inspired in the heart of your servant Pope Benedict XVI the sincere desire to encounter you and announce you, becoming a humble “co-operator with the truth” and offering himself as a servant, for Christ and for the Church, make me also know how to love the Church of Christ and to be able to follow in my life the eternal truths that she proclaims. Deign, Lord, to glorify your servant, Pope Benedict XVI, and grant, through his intercession, the favor I now ask of you (mention your petition). Amen.

Pray an Our Father, Hail Mary, and Glory Be.

Posted by Father Kevin M Cusick at 6:18 AM No comments: