Catholic Prayer: Christmas Day Three ~ Blessing of Wine for the Feast of St. John the Apostle 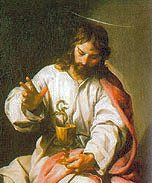 Description:
St. John the Apostle, is the disciple "whom Jesus loved". It is a custom in the old countries to drink of "St. John's Love". The Church provided a special blessing of wine in honor of the Saint. According to legend St. John drank a glass of poisoned wine without suffering harm because he had blessed it before he drank. The wine is also a symbol of the great love of Christ that filled St. John's heart with loyalty, courage and enthusiasm for his Master; he alone of all the apostles was not afraid to stay close to Our Lord during the Passion and Crucifixion.
Prayer:
St. John's wine, blessed by the priest or sprinkled with water by the father of the family, is served with the main meal. In Catholic sections of Europe, even the children receive a little sip of it after the main course of the dinner. The wine is poured in glasses and passed around to the family and guests. As each glass is given, say:
"I drink you the love of St. John."
Response will be "I thank you for the love of St. John."
The following prayer is said over the wine:
Leader: Our help is in the name of the Lord.
All: Who has made heaven and earth.
Leader: The Lord be with you.
All: And also with you.
Leader: Let us pray. Be so kind as to bless and consecrate with Your right hand, Lord, this cup of wine, and every drink. Grant that by the merits of Saint John the Apostle and Evangelist, all who believe in You and drink of this cup may be blessed and protected. Blessed John drank poison from the cup, and was in no way harmed. So, too, may all who this day drink from this cup in honor of Blessed John, by his merits, be freed from every sickness by poisoning and from any harms whatever. And, when they have offered themselves in both soul and body, may they be freed, too, from every fault, through Christ our Lord.
All: Amen.
Leader: Bless, Lord, this beverage which You have made. May it be a healthful refreshment to all who drink of it. And grant by the invocation of Your holy name that whoever tastes of it may, by Your generosity receive health of both soul and body, through Christ our Lord.
All: Amen
Prayer Source: Feast Day Cookbook by Katherine Burton and Helmut Ripperger, David McKay Company, Inc., New York, 1951
Posted by Father Kevin M Cusick at 9:14 AM No comments:

HOLIDAY CHRISTMAS CONCERT
Sacred Heart Church in Bushwood, Maryland is hosting a Holiday Christmas Concert featuring the Chesapeake Orchestra Brass Players on Wednesday, December 28th, starting at 6:30 pm. The concert will feature works of Bach, Handel and Holiday Favorites at the beautifully decorated Sacred Heart Church in the heart of the Maryland country. Performers will be Music Director of the River Concert Series, Jeffrey SIlberschlag, trumpet, with Zachary Silberschlag,trumpet, Nathaniel Silberschlag, Horn, and Bryan Bourne, trombone. Admission is free and doors open at 5:45pm. Check us out on Facebook or at sacredheartbushwood.org for more information.
Posted by Father Kevin M Cusick at 12:34 PM No comments:

“Saint Francis of Sales, the bishop of Geneva, while on a journey during Lent, went to a church that was attached to the monastery of Capuchin friars. He arrived at sermon time; the preacher had taken ostentation in dress as his sermon’s theme and was inveighing vehemently against prelates and ecclesiastical dignitaries who, instead of setting an example of humility, wore splendid garments.

“When the sermon ended, the bishop went into the sacristy and summoned the preacher. Once they were alone, Saint Francis said, ‘Reverend Father, your discourse was edifying. It may also be true that we who are in authority in the Church are guilty of sins from which the inmates of the cloister are exempt. Nevertheless, I consider it highly unwise to say such things as you did on this subject from the pulpit to the common people. Moreover, I wish to call your attention that for many reasons it is a matter of necessity that the princes of the Church should keep up an appearance befitting their rank. Besides, one never knows what may be hidden beneath a silken robe.’

“Saint Francis unbuttoned the upper part of his purple cassock, and let the monk see that he wore a ragged hair shirt next to his skin.

“‘I show you this,’ Saint Francis added, ‘so that you may learn that humility is quite compatible with the rich dress of one’s office. From henceforth, see that you are less harsh in your judgements and more prudent in your speech.'”

“If the dignitaries of the Church were wretchedly dressed, they would lose the respect due to themselves and to their office. Therefore it is not only permissible, but obligatory upon them, to dress in accordance with the official rank they hold.”

Dear Brothers and Sisters in Christ,

On November 9, 2013, this reporter wrote an Open Letter to Pope Francis “On a Papal Commission of Inquiry into Homosexuality, Pederasty
and La Lobby Gay in the Catholic Church”  http://www.renewamerica.com/columns/engel/131110 . A member of the pope’s Council of Eight brought the Open Letter to the attention of the pontiff, and a short time later the Vatican announced the creation of the Pontifical Commission for the Protection of Minors (and vulnerable adults).

At the end of my 2013 Open Letter to Pope Francis, I wrote the following commentary regarding the use of the words “coprophilia” and “coprophagia” made in a news interview in 2012 by the then Archbishop of Buenos Aires, Jorge Mario Bergoglio.

It might surprise you Holy Father, that until quite recently, I still hoped that despite your obvious sympathy for the Homosexual Collective, you nevertheless might find some merit in the concept of a Papal Commission of Inquiry into Homosexuality and Pederasty which I have briefly described in this Open Letter.

Unfortunately, that glimmer of hope was wiped out when by chance a close friend of mine, Marielena Stuart, a multi-lingual journalist and creator of the exquisite blog, Roman Catholic World, sent me a copy of an interview you gave to Rome reporter Andrea Tornielli of the Vatican Insider on February 2012 while you were still Archbishop of Buenos Aires.

In an interview titled "Careerism and Vanity: Sins of the Church," Tornielli's last question to you was: Can you tell us how the Roman Curia is perceived from the outside?
And you, Archbishop Jorge Mario Bergoglio, replied:

I see it as a body that gives service, a body that helps me and serves me. Sometimes negative news does come out, but it is often exaggerated and manipulated to spread scandal. Journalists sometimes risk becoming ill from coprophilia and thus fomenting coprophagia: which is a sin that taints all men and women, that is, the tendency to focus on the negative rather than the positive aspects. The Roman Curia has its down sides, but I think that too much emphasis is placed on its negative aspects and not enough on the holiness of the numerous consecrated and lay people who work in it.

derives sexual excitement from the presence of feces. The term "coprophagia" pertains to the actual act of eating excrement. Both

paraphilias are commonly associated with homosexual behavior and are a regular feature of homosexual pornography.

you are not unschooled in the ways and dangers of sexual perversion, and hence, have no real need for me to instruct you on the

perversity of homosexual behaviors, nor on the grave necessity of combating the Homosexual Collective and other forces of organized

And so it is with great sorrow that I bring this Open Letter to a close.

Whether or not it will have any salutary effect upon your pontificate, especially as regards the establishment of a Papal

Commission of Inquiry into Homosexuality and Pederasty, only time will tell. ...

It was, therefore, with a great sadnessand deep sense of outrage that I sawthat in the December 7, 2016, interview for the Belgian Catholic weekly, Tertio , the occupant of the Chair of Peter repeated the very same terms, coprophilia and coprophagia, in almost the same context that he used them more than four years ago in reference to the Roman Curia, before he became pope.

There is no question that the pope knew exactly what he was doing when he chose to deliberately link a disgusting and perverse nomenclature to the communication issue of false news. What other objective is there in doing such a dastardly deed than to desensitize the faithful to the
horror of sexual perversion and to attempt to introduce perverted words and acts into normal Catholic parlance?

Francis needs to offer a prompt apology, first to God and then to the faithful Catholics everywhere, for his misuse of the Papal Office to
promulgate such perverted and degrading terminology in a public forum. I respectfully suggest, for his eternal welfare, that the apology come sooner than later.

Posted by Father Kevin M Cusick at 12:27 PM No comments:

Hello H,
Wonderful news!
I think I might have met you and visited your home?
The Lord says that Sunday Mass is necessary unless a grave reason prevents arttendance. Perhaps I mistakenly believed you were already aware of this.
Please take some time to pray about this ordinary witness of faith without which we cannot be saved.
God bless your family,
FrC
Posted by Father Kevin M Cusick at 3:03 PM No comments: