In response to sacrilege, blasphemy and unbelief, "Hold Up the Eucharist Even Higher" 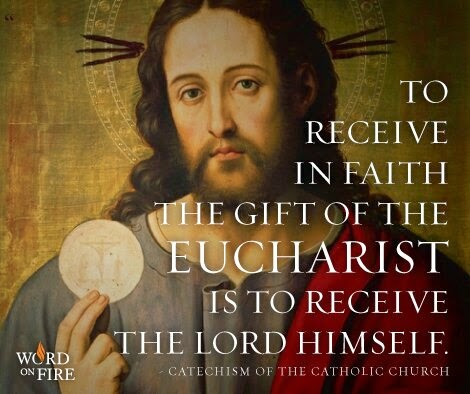 I stand with Father Robert Barron and, in response to the deplorable "Black Mass" at Harvard, I hold up the Eucharist even higher.
Posted by MCITL at 1:05 PM No comments:

Cardinal Müller statement to LCWR: "religious moving beyond the Church or even beyond Jesus."

I am happy to welcome once again the Presidency of the LCWR to Rome and to the Congregation. It is a happy occasion that your visit coincides with the Canonization of Pope John Paul II and Pope John XXIII, two great figures important for the Church in our times. I am grateful as well for the presence and participation of the Delegate for the implementation of the LCWR Doctrinal Assessment, Archbishop Peter Sartain.

As in past meetings, I would like to begin by making some introductory observations which I believe will be a helpful way of framing our discussion.

First, I would like to acknowledge with gratitude the progress that has been made in the implementation of the Doctrinal Assessment. Archbishop Sartain has kept the Congregation appraised on the work regarding the revision of the LCWR Statutes and civil by-laws. We are glad to see that work continue and remain particularly interested that these foundational documents reflect more explicitly the mission of a Conference of Major Superiors as something centered on Jesus Christ and grounded in the Church’s teaching about Consecrated Life. For that collaboration, I thank you.

Two further introductory comments I would like to frame around what could be called objections to the Doctrinal Assessment raised by your predecessors during past meetings here at the Congregation and in public statements by LCWR officers. We are aware that, from the beginning, LCWR Officers judged the Doctrinal Assessment to be “flawed and the findings based on unsubstantiated accusations” and that the so-called “sanctions” were “disproportionate to the concerns raised and compromised the organization’s ability to fulfill its mission.” This principal objection, I note, was repeated most recently in the preface of the collection of LCWR Presidential Addresses you have just published. It is my intention in discussing these things frankly and openly with you to offer an explanation of why it is that we believe the conclusions of the Doctrinal Assessment are accurate and the path of reform it lays before the LCWR remains necessary so that religious life might continue to flourish in the United States.

Let me begin with the notion of “disproportionate sanctions.” One of the more contentious aspects of the Mandate—though one that has not yet been put into force—is the provision that speakers and presenters at major programs will be subject to approval by the Delegate. This provision has been portrayed as heavy-handed interference in the day-to-day activities of the Conference. For its part, the Holy See would not understand this as a “sanction,” but rather as a point of dialogue and discernment. It allows the Holy See’s Delegate to be involved in the discussion first of all in order to avoid difficult and embarrassing situations wherein speakers use an LCWR forum to advance positions at odds with the teaching of the Church. Further, this is meant as an assistance to you, the Presidency, so as to anticipate better the issues that will further complicate the relationship of the LCWR with the Holy See.

An example may help at this point. It saddens me to learn that you have decided to give the Outstanding Leadership Award during this year’s Assembly to a theologian criticized by the Bishops of the United States because of the gravity of the doctrinal errors in that theologian’s writings. This is a decision that will be seen as a rather open provocation against the Holy See and the Doctrinal Assessment. Not only that, but it further alienates the LCWR from the Bishops as well.

I realize I am speaking rather bluntly about this, but I do so out of an awareness that there is no other interpretive lens, within and outside the Church, through which the decision to confer this honor will be viewed. It is my understanding that Archbishop Sartain was informed of the selection of the honoree only after the decision had been made. Had he been involved in the conversation as the Mandate envisions, I am confident that he would have added an important element to the discernment which then may have gone in a different direction. The decision taken by the LCWR during the ongoing implementation of the Doctrinal Assessment is indeed regrettable and demonstrates clearly the necessity of the Mandate’s provision that speakers and presenters at major programs will be subject to approval by the Delegate. I must therefore inform you that this provision is to be considered fully in force. I do understand that the selection of honorees results from a process, but this case suggests that the process is itself in need of reexamination. I also understand that plans for this year’s Assembly are already at a very advanced stage and I do not see the need to interrupt them. However, following the August Assembly, it will be the expectation of the Holy See that Archbishop Sartain have an active role in the discussion about invited speakers and honorees.

Let me address a second objection, namely that the findings of the Doctrinal Assessment are unsubstantiated. The phrase in the Doctrinal Assessment most often cited as overreaching or unsubstantiated is when it talks about religious moving beyond the Church or even beyond Jesus. Yes, this is hard language and I can imagine it sounded harsh in the ears of thousands of faithful religious. I regret that, because the last thing in the world the Congregation would want to do is call into question the eloquent, even prophetic witness of so many faithful religious women. And yet, the issues raised in the Assessment are so central and so foundational, there is no other way of discussing them except as constituting a movement away from the ecclesial center of faith in Christ Jesus the Lord.

For the last several years, the Congregation has been following with increasing concern a focalizing of attention within the LCWR around the concept of Conscious Evolution. Since Barbara Marx Hubbard addressed the Assembly on this topic two years ago, every issue of your newsletter has discussed Conscious Evolution in some way. Issues of Occasional Papers have been devoted to it. We have even seen some religious Institutes modify their directional statements to incorporate concepts and undeveloped terms from Conscious Evolution.

Again, I apologize if this seems blunt, but what I must say is too important to dress up in flowery language. The fundamental theses of Conscious Evolution are opposed to Christian Revelation and, when taken unreflectively, lead almost necessarily to fundamental errors regarding the omnipotence of God, the Incarnation of Christ, the reality of Original Sin, the necessity of salvation and the definitive nature of the salvific action of Christ in the Paschal Mystery.

My concern is whether such an intense focus on new ideas such as Conscious Evolution has robbed religious of the ability truly to sentire cum Ecclesia. To phrase it as a question, do the many religious listening to addresses on this topic or reading expositions of it even hear the divergences from the Christian faith present? This concern is even deeper than the Doctrinal Assessment’s criticism of the LCWR for not providing a counter-point during presentations and Assemblies when speakers diverge from Church teaching. The Assessment is concerned with positive errors of doctrine seen in the light of the LCWR’s responsibility to support a vision of religious life in harmony with that of the Church and to promote a solid doctrinal basis for religious life. I am worried that the uncritical acceptance of things such as Conscious Evolution seemingly without any awareness that it offers a vision of God, the cosmos, and the human person divergent from or opposed to Revelation evidences that a de facto movement beyond the Church and sound Christian faith has already occurred.

I do not think I overstate the point when I say that the futuristic ideas advanced by the proponents of Conscious Evolution are not actually new. The Gnostic tradition is filled with similar affirmations and we have seen again and again in the history of the Church the tragic results of partaking of this bitter fruit. Conscious Evolution does not offer anything which will nourish religious life as a privileged and prophetic witness rooted in Christ revealing divine love to a wounded world. It does not present the treasure beyond price for which new generations of young women will leave all to follow Christ. The Gospel does! Selfless service to the poor and marginalized in the name of Jesus Christ does!

It is in this context that we can understand Pope Francis’ remarks to the Plenary Assembly of the International Union of Superiors General in May of 2013. What the Holy Father proposes is a vision of religious life and particularly of the role of conferences of major superiors which in many ways is a positive articulation of issues which come across as concerns in the Doctrinal Assessment. I urge you to reread the Holy Father’s remarks and to make them a point of discussion with members of your Board as well.

I have raised several points in these remarks, so I will stop here. I owe an incalculable debt to the women religious who have long been a part of my life. They were the ones who instilled in me a love for the Lord and for the Church and encouraged me to follow the vocation to which the Lord was calling me. The things I have said today are therefore born of great love. The Holy See and the Congregation for the Doctrine of the Faith deeply desire religious life to thrive and that the LCWR will be an effective instrument supporting its growth. In the end, the point is this: the Holy See believes that the charismatic vitality of religious life can only flourish within the ecclesial faith of the Church. The LCWR, as a canonical entity dependent on the Holy See, has a profound obligation to the promotion of that faith as the essential foundation of religious life. Canonical status and ecclesial vision go hand-in-hand, and at this phase of the implementation of the Doctrinal Assessment, we are looking for a clearer expression of that ecclesial vision and more substantive signs of collaboration.
Posted by MCITL at 10:24 AM No comments: