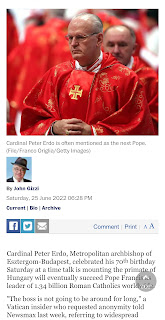 "The boss is not going to be around for long," a Vatican insider who requested anonymity told Newsmax last week, referring to widespread reports that the 85-year Francis is in failing health. "At the most, he will be there until December."

The same source told Newsmax to closely "watch Cardinal Erdo ... he is the one who [the College of Cardinals, who will elect the next Pope] are beginning to talk about. And he will be great."

Talk of Erdo as a future Pope is nothing new. But it has recently been heightened by the growing rumors that Pope Francis is in failing health or that he may retire following the consistory (meeting) Aug. 27 at which he will formally install 21 new cardinals (16 of whom are under the age of 80 and thus eligible to vote for the next Pope).

Considered a traditionalist in the mold of Popes John Paul II and Benedict, sources say Erdo shows respect to those who prefer the Mass in Latin, celebrated universally for 500 years until 1970 (and with whom Francis has created tremendous animosity by attempting to limit the Latin Mass through his document "Traditiones Custodes," issued last July).

Erdo is fluent in Latin as well as Italian, French, English, and his native Hungarian.

His traditionalist pedigree aside, Erdo is also respected by the so-called "modernist" or "liberal" faction in the church embodied by Francis. The current Pope appointed Erdo as the "relator general" of the Third Extraordinary General Assembly of the Synod of Bishops in October of 2014. The theme of the synod was "The Challenges of the Family in the Context of Evangelization."

Posted by Father Kevin M Cusick at 7:25 AM