The Metropolitan Museum of Art: Homage to Sicilian liturgical vestments

The below pictured liturgical lace and embroidered vestment are from the collection of the venerable Metropolitan Museum of Art in New York.

Italian handmade bobbin lace from Sicily is included in the collection of the Metropolitan. One example here:

The beautiful handiwork is described at this link to the museum web site: https://www.metmuseum.org/art/collection/search/214927

The Met provides the following commentary on the below pictured chasuble, also originating in Sicily:

“This chasuble is from a set of six vestments—also including a stole, maniple, burse, chalice veil, and chalice cover—whose quality, extent, and provenance make the group an important addition to the Museum's fine collection of ecclesiastical costume. The chasuble's embroidered decoration-a nearly symmetrical pattern of full-blown, seminaturalistic flowers, small blossoms, curving leaves, and scrolls—is an excellent example of the style of late Baroque ornament used to embellish Italian vestments from the end of the seventeenth century to the middle years of the eighteenth. The robust flowers, worked in long and short stitches, French knots, and metallic loops, are carefully modeled in four to five shades of silk. The metallic thread is primarily used in laid and couched work, cursively following the contours of the motifs and secured in twill or chevron patterns with yellow silk. Although it is often impossible to identify the specific place of manufacture of such embroideries, documentation accompanying this gift proposes western Sicily. Attestations given in 1915 in Partanna and Mazara del Vallo state that according to tradition this set of vestments was a gift to Nicolo Spedaliere (also recorded as Spitaleri), head priest of the mother church of Partanna, from his bishop. Furthermore, the superior of the Collegia di Maria, which was founded in 1681 in Mazara del Vallo, avers that since that time schools and women's religious orders have existed throughout the diocese in which embroidery like this example as well as other types were practiced.” 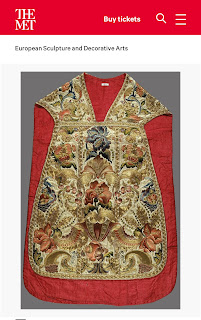