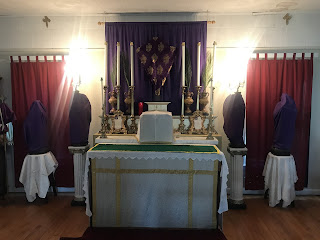 Posted by Father Kevin M Cusick at 8:38 AM No comments:

Child martyr, Saint Simeon of Trent, “most cruelly murdered by the Jews”

From the Roman Martyrologium, anticipated, for today March 23, 2021: 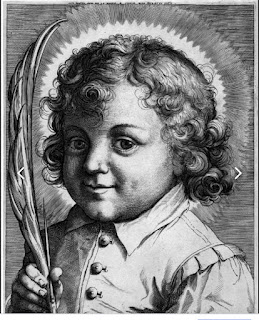 A “Tale of Two Masses” at Saint Peter’s Basilica in Rome today: One looking forward and the other backward 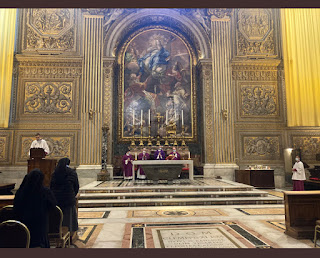 A Tale of Two Holy Masses at Saint Peter’s Basilica in Rome today.
It was a very different tale of two Masses today at Saint Peter’s Basilica in Rome. Many far fewer masses than are usually celebrated in the Basilica because of the draconian new restrictions that went into effect yesterday on March 21 lawlessly prohibiting any but concelebrated masses in the main church. Edward Pentin shared these photos on Twitter: one traditional Latin mass in the Clementine grotto and the other concelebrated in the upper church. One of them looks forward toward the Lord of history and the other looks backward in 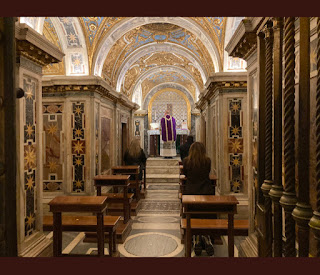 an obvious homage to the Covid religion. I’ll let you guess which is which.
Posted by Father Kevin M Cusick at 12:40 PM No comments:

Dominica de Passione: “Do me justice, O God...from the deceitful and impious man rescue me.” 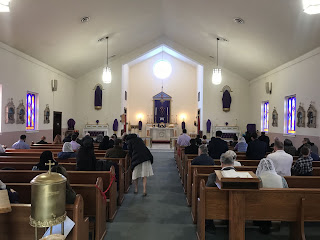 Do me justice, O God, and fight my fight against a faithless people; from the deceitful and impious man rescue me. For You are my God and my strength.Send forth Your light and Your fidelity; they shall lead me on and bring me to Your holy mountain, to Your dwelling-place.
Psalm 42, 1-3
Posted by Father Kevin M Cusick at 6:39 PM No comments:

Veiling the statues for Passiontide 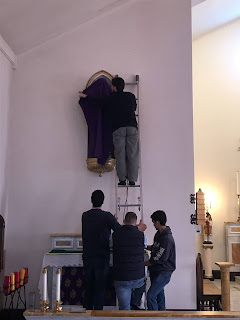 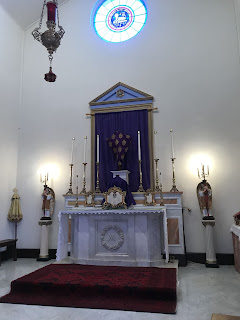 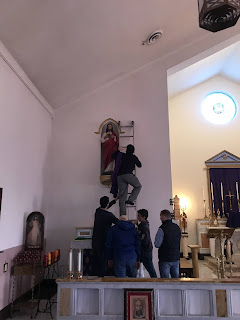 Posted by Father Kevin M Cusick at 6:10 PM No comments:

Blessed feast of Saint Joseph, Spouse of the Blessed Virgin Mary and Patron of the Universal Church 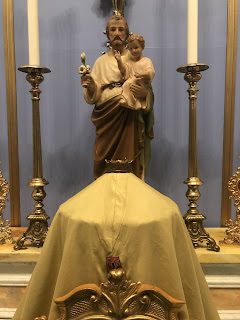 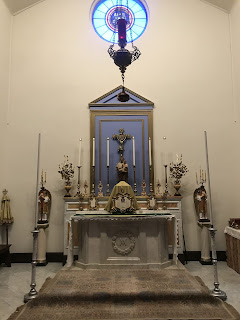 Let us pray.Help us, we beseech thee, O Lord, for the sake of the Husband of thy most holy Mother, that what we cannot for ourselves obtain, Thou mayest grant us at his petition.Who livest and reignest with God the Father in the unity of the Holy Spirit, one God, world without end.R. Amen
Posted by Father Kevin M Cusick at 8:12 AM No comments:

The Vatican Has Just Planted a Time Bomb

The statement of the Congregation for the Doctrine of the Faith (CDF) which refutes "blessing" homosex liaisons contains a time bomb because it refers to “positive elements” in them, Father Ronald Vierling notices on Twitter.com.

Vierling is a former rector of Notre Dame University. He sees a “troubling innovation” as the CDF is adopting the language in a way that it "represents a shift.”

The upcoming detonation of the time bomb will follow the same tactic as Vatican II which introduced an "ambiguous phraseology to be exploited later.”

A similar point was made by Aachen Bishop Helmut Dieser who told the German Synodal Way that he notices “dynamic terms” in the Vatican document such as “positive elements” in homosex liaisons which is for him a "sign of hope" for a possible further "development [= reversal] of the teaching.”

The attempt to whitewash evil by looking for "positive elements" is insidious and dishonest, as "positive elements" can be found in any evil - even in the devil himself - since every evil is the corruption of something which is good.
Source: Gloria.tv

Posted by Father Kevin M Cusick at 6:36 PM No comments:

On addiction to internet outrage, men, faith and family life from Matthew Walther:

Posted by Father Kevin M Cusick at 11:31 AM No comments:

From Gloria.tv:
The Weeds Grow, While the Wheat Is Uprooted
A Friday decree from the Vatican Secretariat of State has banned all private masses in St Peter's Basilica from the 22nd March on. Now, the Catholic internet is running hot.
In a statement, Cardinal Burke called the decree illegal and unjust. The Secretariat of State is not competent, he said, and the decree contradicts canon law, which provides for the daily celebration of Mass by the priests. However, the Secretariat of State is not just anybody but the direct executive organ of the Pope.
Chanceless: Writers of Decree Control the Courts
The German Canon lawyer Father Gero Weishaupt recommended on Kathnews.de legal action against the decree. Affected priests could lodge an administrative complaint against the unlawful act directly with the Apostolic Signature. However, it is clear from the beginning that this would lead nowhere. For decades, canon law has been used consistently to block a Catholic renewal. Besides that, the writers of the decree control the courts.
Demons Introduced, Angels Expelled
Father John Stone sees on Twitter.com a connection with the Pachamama cult in St. Peter's Basilica. Since Pachamama was venerated there in October 2019, the main altar was hardly or never used again, he noticed. Now, masses are banned from the basilica, which, according to Chrysostom, fill the entire space of the Church with angels in order to worship the slain Lamb. The German writer Ernst Jünger once commented on the decline of the Church by saying, "Demons dwell on empty altars".
Do Not Assume Incompetence and Ignorance
Father Joseph Krupp remarked on Twitter that the Vatican is addressing private masses where there is no problem instead of dealing with the countless issues it has. Krupp excuses this malicious act with the fact that the Vatican’s "cluelessness is boundless". But this explanation is likely not correct. The writers of the decree knew exactly what they were doing.
Total Control Over Every Mass
Steve Skojec of OnePeterFive.com writes, in contrast to many old-rite commentators, that the decree is not just about banning the Old Mass. Many complaints against the decree came also from New Rite priests.
For Skojec, this is "an attack on any liturgy they can't control." This is likely true. The priest's Mass is seen as an attack against the modernist ideology that replaces God with a so-called community. Persecution of Christians in St. Peter's The German Journalist Armin Schwibach calls the measure, along with other restrictions already in place, a "persecution of Catholics in St Peter's". With one letter, a centuries-old practice is simply wiped out, he writes. Schwibach believes that canon lawyers will have a lot to say about the decree, starting with the blatant overstepping of jurisdiction. But Schwibach overestimates canon law: ecclesiastical jurisprudence is a phantom science that is not worth the paper it is written on.
A Purge
Father Josh Miller writes that in the face of such reprisals one need not be surprised that the young Catholic generation is becoming more and more radicalised. Father Timothy Finigan recognises in this a victory for the liturgical Jansenists in their desperate struggle for supremacy. Father Michael Petkosek speaks of a purge against Catholicism, a modern reaction to the old faith, a false solution where no problem existed.
Posted by Father Kevin M Cusick at 10:00 AM No comments:

Concocting a potion from baby parts is a witch’s brew

This statement by Catholic doctors and Bishop Strickland is helpful, certainly:

But isn’t it more to the point to simply say that concocting a potion, brew, unguent or salve from baby parts is a species of witchcraft?

Others down the line may be less culpable, of course, but when is a sinful remedy ever helpful to the soul?

Posted by Father Kevin M Cusick at 10:22 PM No comments:

Deaths and illness resulting from a vast experiment on human beings

Protecting the elderly and the vulnerable has always been a reasonable approach to limiting the tragedy of loss of life in pandemics or infectious diseases. The means of doing so should always be proportionate, however.

Would you undergo an experiment that could in the least way harm you to protect you from a threat that is unlikely to kill you?

Posted by Father Kevin M Cusick at 7:18 AM No comments:

BXVI on Biden: Impossible to be privately against abortion and at the same time publicly for abortion

LifeSite and other news sources are saying that in an interview with Corriere della Sera Newspaper Benedict XVI is reported to have said that Biden is “personally against abortion.”

Even if he did say that, and we can’t be sure that he did, for a Catholic there can be no distinction between a so called “personal position” and a supposed “public position” in matters of faith and morals, that is, settled doctrine in the truths that are necessary for a Catholic to believe and profess in order to be saved.

First of all, we can’t be entirely sure that this is accurate reporting or that Benedict actually said this. There is the matter of translating from Italian into English and other potential issues that could have resulted in an erroneous translation.

But above and beyond that, when it comes to Catholics in public life, as for any Catholic it is impossible to assert that one can have a “private position” on a moral teaching and a “public position” which differs from that private position.

The Lord says “what you do in the dark will be seen in the light and what is whispered in private will be proclaimed  from the rooftops”. If Biden is promoting abortion publicly he cannot claim to have a private pro life position. There is no such division in the human person as being for something in public and against it in private or vice versa.

The Lord also teaches “He who is not with Me is against Me; and he who does not gather with Me scatters.” Luke 11

If Biden “scatters” in public by funding, promoting and aggressively exporting abortion around the world he cannot at the same time privately “gather” with Christ when it comes to respecting the sacredness of every human life.

We can be sure that Benedict XVI knows this well, which is why I would be surprised if he did in fact deny it as is claimed.

Posted by Father Kevin M Cusick at 4:49 PM No comments: