"The Days of the Giants" by Father Dave Wells

One of the things I most look forward to in my ministry as a priest is bringing Communion to the homebound. As part of the routine, I’ll usually engage people in conversation as part of the visit. I like to hear their stories from the past, especially regarding their growing up in the faith. I am often awestruck by their devotion to the Lord, and the reverence for Christ and his Church that used to prevail in Catholic culture. I was struck a couple times this week by people who gave me great examples of devotion to the Mass.

One homebound woman described how in her childhood they would have to walk three miles to church every Sunday. They were very poor, so each child had only one pair of shoes. Every Sunday they would wake up, put on their Sunday best and head off to church. For the first two miles they would walk barefoot so as not to dirty their shoes. As they approached the church, they would put their shoes on, and they looked as clean and presentable as anyone else in the congregation. After hearing a story like that, I’m honored to be able to drive to her house and give her Holy Communion.

This week I visited another elderly gentleman who can barely move, even though he has use of a wheelchair. He’s actively dying of cancer, and his body is starting to break down. When I went to visit him, he was apologetic that he hadn’t been making it to Mass. I reassured him that in no way, shape or form was he required to be at Mass on Sunday. Rather, we should be required to bring him Communion as often as he desires.

These two examples of people so dedicated to the Mass and so well instructed in the Sunday obligation remind me of a phrase that an elderly priest often used with me. When I would describe to the priest how much freedom we had in the seminary and how much time we had off for breaks, he would look at me with a wry smile and say, “It ain’t like the days of the giants.” What he meant was that we have it easier nowadays, and that we’re a little bit softer; although he would say this jokingly, I can see so often, especially when I’m doing these Communion calls, that there is a lot of truth to that.

Hopefully, we’re raising up a new generation of boys and girls who will have as much love and devotion for Christ, the Church and the sacraments as those spiritual giants to whom I’m able to bring Communion. ⸠
Posted by Father Kevin M Cusick at 2:28 PM No comments: 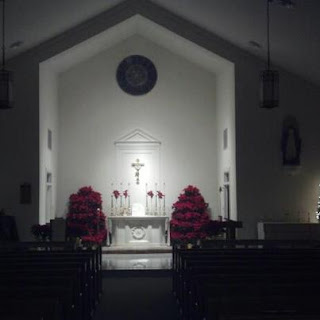 As of July this year Saint Francis de Sales Catholic Church in Benedict is the sole location in southern Maryland that offers the extraordinary form liturgy, or traditional Latin Mass, every week on Sundays.  A low Mass is offered at 11 am every Sunday at the church located at 7185 Benedict Avenue, Benedict, Maryland 20612.

The extraordinary form liturgy is offered on holy days of obligation at 8 pm.  On the Solemnity of the Assumption of Mary, on August 15th, a Missa Cantata will be celebrated at 8 pm.