Very pious: the Roman refrigerium for the dead 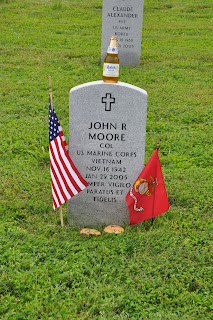 A Marine's grave after the visit of a friend, Memorial Day 2011.

When the ancient Romans would visit the family mausoleum at the necropolis they would picnic, sometimes on the roof of the house for the dead, pouring some of their wine through a hole into the tomb in a ritual that was called the "refrigerium", or refreshment.

This was later incorporated into the Roman Canon where we pray for the dead, asking God to grant them a place of "refreshment, light and peace".

The new translation is:

"Remember also, Lord, your servants N. and N., who have gone before us with the sign of faith and rest in the sleep of peace. Grant them, O Lord, we pray, and all who sleep in Christ, a place of refreshment, light, and peace."

For more on this portion of the Roman Canon, click here.

John and I both thank you, Father!!!