Over 1 Million Today at John Paul II Beatification: he "helped believers throughout the world not to be afraid"

"By his witness of faith, love and apostolic courage, accompanied by great human charisma, this exemplary son of Poland helped believers throughout the world not to be afraid to be called Christian, to belong to the Church, to speak of the Gospel. In a word: he helped us not to fear the truth, because truth is the guarantee of liberty. To put it even more succinctly: he gave us the strength to believe in Christ, because Christ is Redemptor hominis, the Redeemer of man. This was the theme of his first encyclical, and the thread which runs though all the others."

-- Benedict XVI, Homily for Mass of Beatification
Italian police estimated the size of the crowd at Saint Peter's Basilica and at other locations around Rome for the beatification of Pope John Paul II at more than 1 million persons. 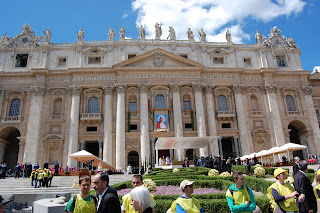 I am posting these photos from the Holy See Press Office. The esplanade was decorated with flowers, trees and plants for today's Mass of beatification. As the crowds disperse following the Mass of beatification young people visible here from the Diocese of Rome are helping with crowd control. The press of people in Saint Peter's Square made exit difficult. 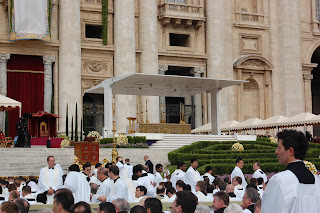 Priests in the hundreds were seated where the esplanade meets the Square. The day began cloudy and cool but quickly turned hot. Many pilgrims took refuge under umbrellas to prevent excessive "sun bath". 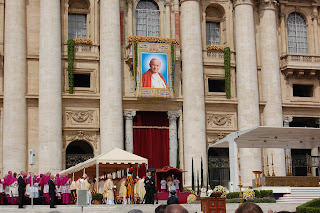 Cedars, olive trees and flowers frame the altar and the Holy Father's cathedra under a red canopy in the central position under the portrait of Blessed John Paul II. Cardinal Wuerl, Archbishop of Washington, was easily visible during the Mass, seated as he was under the canopy with the other concelebrating cardinals at the left in this photo and at the end closest to the Piazza. 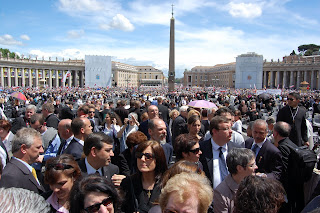 Crowds stretch from Piazza San Pietro to the River Tevere and spilled out into the side streets surrounding Vatican City. 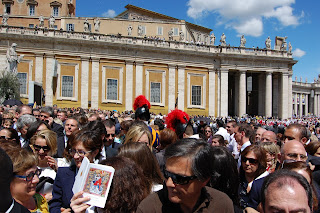 Swiss Guards in red-plumed headgear help to channel the human flow between the Square and the Basilica which will be open for visits to view the casket of Blessed John Paul in the upper church until it is placed in its new altar after 5 am Monday.

Click here to view the video of some of the thousands who are passing in procession to venerate the remains of Blessed John Paul II in Saint Peter's Basilica until early Monday.