"so grant me God and so help me His Saints." 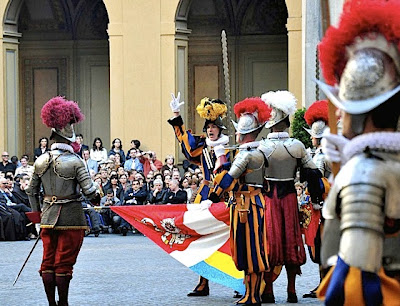 ""I vow to faithfully, honestly and honorably serve the reigning Pope ____ and his legitimate successors, and to dedicate myself to them with all my strength, ready to sacrifice, should it become necessary, even my own life for them... Furthermore, I pledge to the Commandant and to my other superiors respect, fidelity, and obedience. I swear to abide by all the requirements attendant to the dignity of my rank."

When his name is called, each new guard approaches the Swiss Guard's flag, grasping the banner in his left hand. He raises his right hand with his thumb, index, and middle finger extended along three axes, a gesture that symbolizes the Holy Trinity, and speaks:

I, ____, swear diligently and faithfully to abide by all that has just been read out to me, so grant me God and so help me his Saints."

Photo: The swearing in of new recruits to the Swiss Guard, held at the Apostolic Palace on May 5, by Sergio Mora.
Posted by Father Kevin M Cusick at 7:06 PM