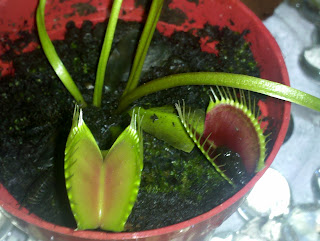 Tonight I caught a spider in the church and a stinkbug inside a window screen in the rectory and put them both inside the terrarium with the fern and venus flytrap.

The first photo (above) shows what is left of the stink bug inside the flytrap a few hours later, a shiny mass in the process of being broken down inside the trap with the reddened interior on the lower right side of the plant. In the second photo (below) the flytrap has fully closed around the stinkbug. The spider is still sitting perched in the same position on the upper left side of the fern where it was a few hours ago. Perhaps it had not yet finished its prayers when I abruptly removed it from the church and its motionlessness merely indicates engagement in pious meditation or is the result of beatific union with the Creator. 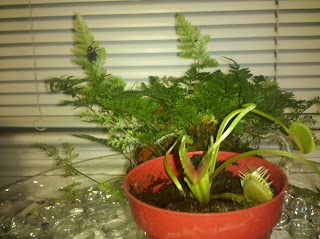