I Nuraghi di Sardegna / Nuraghe fortifications of 1500 BC

The "Nuraghi" are prehistoric fortifications found throughout Sardegna. Together with my host, Don Luca, pastor of Santa Giusta in Gesico, Sardegna, and Fathers Fabrizio and Ferdinando today I visited an extensive site surrounding one of these nuraghi at"Su Nuraxu di Buramini", considered to be the most significant of the nuraghi and a UNESCO world heritage site. 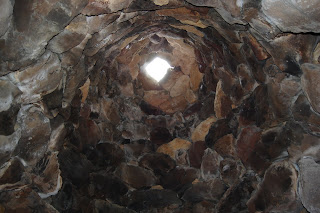 From inside the tower a view of the sky. 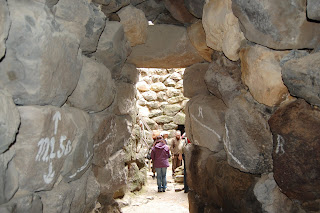 A view from within one of the four towers toward the central courtyard surrounding the underground potable water source which still flows. The nuraghi were built over water sources which guaranteed life and prosperity. 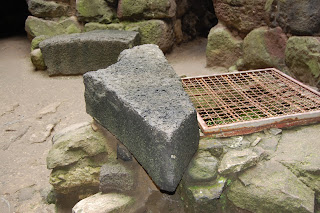 A piece of the pavement which originally covered a walkway connecting the towers near the top of the structure once 20 meters high. The fragment now rests near ground level next to the opening above the well. 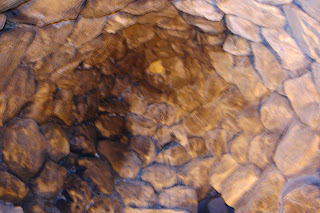 A closed conical room inside a tower. 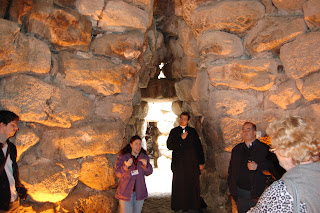 Father Luca, center, and Father Ferdinando, right, visible next to an opening from a tower into the central courtyard. 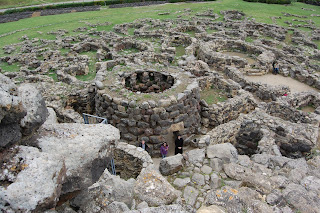 A view from the top of the remaining structure reveals the remnant of a guard tower built later in the evolution of the complex and additional structures built by later civilizations using stones from the larger towers. 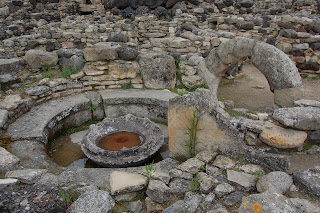 A sacred fount and small chapel within a living complex which had seven rooms opening off of a central courtyard and believed to have a roof of wood and grass. Visible to the right of the small cultic circular stone bench surrounding a type of font for a ritual using water one can see what remains of the arch over a fireplace. A stone receptacle next to it would have been used to heat water. 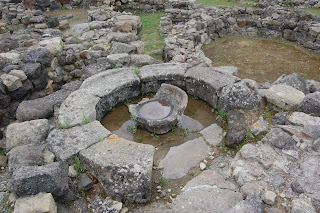 Another cultic room again with circular bench and sacred font. 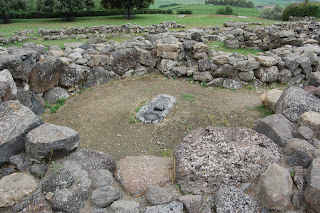 A mill structure for grinding grain with what remains of an oven for baking bread in the far section of the surrounding wall. 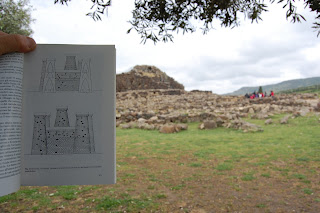 An artist's conception at left gives an idea of the outlines of the original structure with four crenellated towers surrounding a central higher tower. The ruins are in the background. 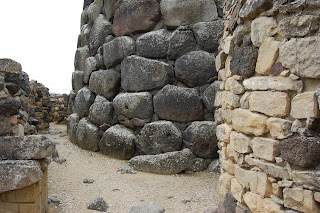 The base of a tower with monumental stones dates to the earliest construction 1500 B.C. 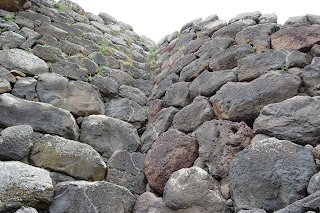 The largest stones found at the base of the structure are the most ancient, mined of volcanic basalt formations in nearby hills, and according to one theory moved by donkey and cart to the building site to be placed one on top of another without use of cement. The construction was probably accessed by means of frames or ramps built up around the structure as it rose higher and higher. 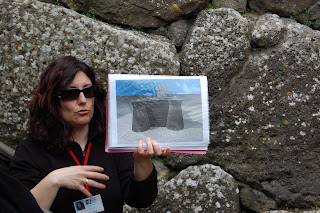 The guide holds a picture of an artistic conception of the ancient complex. 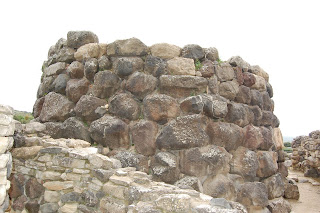 The complex was continually improved and enlarged as circumstances and resources permitted as seen with these remains of a tower built into an additional fortification wall surrounding the inner four towers and central tower next to the well.
Posted by Father Kevin M Cusick at 9:51 AM