Continuation of the Holy Gospel according to Matthew

Matt 1:18-21 When as his mother Mary was espoused to Joseph, before they came together, she was found with child, of the Holy Ghost. And so on.Homily by St. Jerome, Priest at Bethlehem.Book of Commentaries, on Matth. i. Why was the Lord conceived of an espoused virgin rather than of a free? First, for the sake of the genealogy of Mary, which we have obtained by that of Joseph. Secondly, because she was thus saved from being stoned by the Jews as an adulteress. Thirdly, that Himself and His mother might have a guardian on their journey into Egypt. To these, Ignatius, the martyr of Antioch, has added a fourth reason namely, that the birth might take place unknown to the devil, who would naturally suppose that Mary had conceived by Joseph. 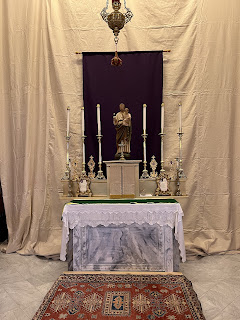 From the Sermons of St. Bernard, Abbot of Clairvaux.2nd on Luke i. 26 What and what manner of man the blessed Joseph was, we may gather from that title wherewith, albeit only as a deputy, God deemed him fit to be honoured he was both called, and supposed to be the Father of God. We may gather it from his very name, which, being interpreted, signifieth Increase. Remember likewise that great Patriarch who was sold into Egypt, and know that the Husband of Mary not only received his name, but inherited his purity, and was likened to him in innocence and in grace.
If then, that Joseph that was sold by his brethren through envy, and was brought down to Egypt, was a type of Christ sold by a disciple, and handed over to the Gentiles, the other Joseph flying from the envy of Herod carried Christ into Egypt. That first Joseph kept loyal to his master, and would not carnally know his master's wife; that second Joseph knew that the Lady, the Mother of his Lord, was a virgin, and he himself remained faithfully virgin toward her. To that first Joseph it was given to know dark things in interpreting of dreams; to the second Joseph it was given in sleep to know the mysteries of the kingdom of heaven.
The first Joseph laid by bread, not for himself, but for all people; the second Joseph received into his keeping that Living Bread Which came down from heaven, not for him only, but for the whole world. We cannot doubt but that that Joseph was good and faithful to whom was espoused the Mother of the Saviour. Yea, I say, he was a faithful and wise servant, whom the Lord appointed to be the comfort of His own Mother, the keeper of His own Body, and the only and trusty helper in the Eternal Counsels.
Posted by Father Kevin M Cusick at 9:48 AM