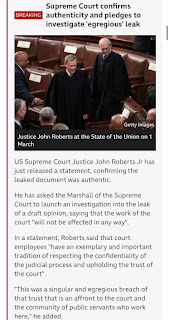 "This has the sign of authenticity," Dershowitz told Monday's "Rob Schmitt Tonight." "It also to me, and this is just a theory, but I think it's maybe correct: The leak was very deliberately – perhaps by a law clerk who was very strongly opposed to reversing Roe v. Wade – seeking to make it public now so that pressure could be put on the Supreme Court, either by an act of Congress to pack the court, or an act of Congress making a federal legislative right of every woman to have an abortion based on the Commerce Clause."

"But this was not just an inadvertent leak," Dershowitz told host Rob Schmitt as the news was breaking from the Politico-leaked draft. "I think this was an act of civil disobedience engaged in by a determined law clerk who thought it was so serious that a woman's right to abortion will be taken away that they were willing to risk their bar, their career, their heritage on this, because this is going to be investigated."

The leaker – potentially trying to be a "hero of the left" – Politico, and the reporter are sure to be investigated amid an unprecedented set of circumstances, according to Dershowitz.

"Politico won't do it, but the case may go all the way to the Supreme Court on that issue as well."

Dershowitz noted Supreme Court Chief Justice John Roberts, his own law student, has to be frustrated he has lost control amid years of partisan attacks on the independence and balance of the court.

Posted by Father Kevin M Cusick at 9:32 AM