Cultural diversity is a current touchstone in the Church. A nearby archdiocese has planned some high visibility meetings about the matter next month. Expectations are high for attendance and participation.

The Church by her nature as both one and universal is culturally diverse. This is God’s plan and it is good. Many different languages and nations make up the universal Body of Christ.

Race, however, is not the only criterion for cultural diversity. We will impoverish ourselves intellectually and spiritually if we define terms down in order to speak to the surrounding zeitgeist while neglecting to uplift the conversation by enriching it with unique insights possible from the perspective of Faith.

Culture finds its root in the word “cult”, which helps us to understand that true culture is an outgrowth or fruit of religion or faith. The culture of the West, born of Christianity and specifically the Catholic Church, now under ferocious assault in many places, is one such outgrowth made possible by millennia of life in tandem with worship which many of us already share.

Cultural diversity can also be found in the different kinds of cult. If it is asserted that the Mass of Vatican II is one authentic source of cultus, religious faith, the worship which expresses it and the daily life it upholds, how much more so the missa antiquior, the traditional Latin Mass, from which the missa recentior comes, with its vast treasury of musical and other arts that both support it and express its spirit.

Cultural diversity in the Church is upheld by different forms of prayer, all of them legitimate and none of them taking away from the unity of the Church any more than people from different languages or cultures need by that reason be divided.

The only threat to diversity is hatred of another people or another culture’s gifts or legitimate expressions, however different from one’s own.

Cultural diversity in the Church depends upon acceptance and flourishing of many different kinds of worship, if in conformity with revealed truth and thus equally helpful for religious faith and the fruits of love of God through public prayer.

Because there is no diversity of culture without diversity of cultus one could in fact say that acting with prejudice toward any cult of worship, whether old or new, is harming or wounding the true sources of both diversity and culture. At the same time unity is wounded and weakened and, with it, the reflection of God which is found where all sources of division are put aside. 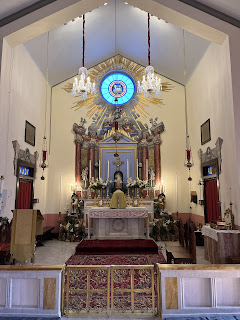 (In photo above the sanctuary of Saint Francis de Sales Catholic Church in Benedict, Maryland, dressed for Dominica in Albis and Divine Mercy Sunday.)