The primary difference between traditional priests and Vatican II priests 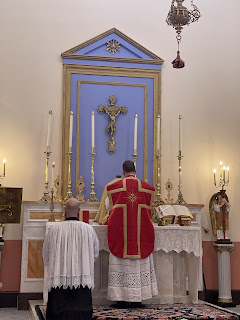 “Peter said to Jesus, ‘Behold, we have left all and followed You; what then shall we have?’
Many Vatican II priests are learning the traditional Mass and this is good. It behooves them to do so as we will need additional priests in the coming days, especially as some of them may be serving the underground church which will be dedicated exclusively to the traditional Latin Mass.
Some of these priests, in their haste to put traditional Masses in place on weekly parish calendars, have not learned to offer it properly. The transition from the nearly rubric-free new Mass to the traditional Latin Mass, which governs every action and posture, can be a difficult one to navigate, especially for priests who must still offer the new Mass on a daily basis.
However there remains one troubling fact and this is the political bent of Vatican II priests. Vatican II cemented a political divide in the Church which should not have any politics involved in its mission. The innovations and in some cases the conciliar contradictions of the traditional Catholic Faith that were introduced into the open at Vatican II caused a political rift in the church between those who want the truth exclusively as handed down and those are willing to accommodate the innovations.
Ambition is a strong narcotic rendering many clerics completely and uncritically amenable to everything promoted as an improvement of Vatican II. The primary means of promotion has been manipulation and emasculation of the liturgy for the sake of achieving rank in the hierarchy. It has become a loyalty test.
Pensions, health care, compensation financial and otherwise, are holding many conciliar priests back; they’re keeping their options open and they’re not willing to assess the facts as they stand. They fear being cast out with no pension or health care.
Very few priests have their own resources to fall back on should their bishops disown them.
The author of division, the evil one, thus scored a victory in his war against the Church and Christ which continues to cause great damage today. How many souls have been lost in the endless conflict between tradition and truth against the innovations based on contradictions of truth?
“And Jesus said to them, ‘Amen I say to you that you who have followed Me, in the regeneration when the Son of Man shall sit on the throne of His glory, shall also sit on twelve thrones, judging the twelve tribes of Israel. And everyone who has left house, or brothers, or sisters, or father, or mother, or wife, or children, or lands, for My name’s sake, shall receive a hundredfold, and shall possess life everlasting.’” Matthew 19, 27-29
Posted by Father Kevin M Cusick at 8:03 AM