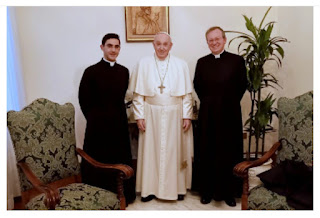 The details of Pope Francis’s recent meeting with the FSSP have been revealed and they are good news for those devoted to the Latin Mass.

On Friday, February 4, 2022, two members of the Priestly Fraternity of St. Peter, Fr. Benoît Paul-Joseph, Superior of the District of France, and Fr. Vincent Ribeton, Rector of St. Peter’s Seminary in Wigratzbad, were received in private audience by the Holy Father, Pope Francis, for nearly an hour.

During the very cordial meeting, they recalled the origins of the Fraternity in 1988, the Pope expressed that he was very impressed by the approach taken by its founders, their desire to remain faithful to the Roman Pontiff and their trust in the Church. He said that this gesture should be “preserved, protected and encouraged”.

In the course of the audience, the Pope made it clear that institutes such as the Fraternity of St. Peter are not affected by the general provisions of the Motu Proprio Traditionis Custodes, since the use of the ancient liturgical books was at the origin of their existence and is provided for in their constitutions.

The Holy Father subsequently sent a decree signed by him and dated February 11, the day the Fraternity was solemnly consecrated to the Immaculate Heart of Mary, confirming for the members of the Fraternity the right to use the liturgical books in force in 1962, namely: the Missal, the Ritual, the Pontifical and the Roman Breviary.

Grateful to the Holy Father, the members of the Fraternity of St. Peter are in thanksgiving for this confirmation of their mission. They invite all the faithful who feel close to them as a spiritual family to attend or join them in prayer at the Mass tomorrow, on the feast of the Chair of St. Peter, and to pray for the Supreme Pontiff.

The Holy Father Francis, grants to each and every member of the Society of Apostolic Life “Fraternity of Saint Peter”, founded on July 18, 1988 and declared of “Pontifical Right” by the Holy See, the faculty to celebrate the sacrifice of the Mass, and to carry out the sacraments and other sacred rites, as well as to fulfill the Divine Office, according to the typical editions of the liturgical books, namely the Missal, the Ritual, the Pontifical and the Roman Breviary, in force in the year 1962.

They may use this faculty in their own churches or oratories; otherwise it may only be used with the consent of the Ordinary of the place, except for the celebration of private Masses.

Without prejudice to what has been said above, the Holy Father suggests that, as far as possible, the provisions of the motu proprio Traditionis Custodes be taken into account as well.

Given in Rome, near St. Peter’s, on February 11, the Feast of Our Lady of Lourdes, in the year 2022, the ninth year of my Pontificate.

Posted by Father Kevin M Cusick at 8:12 AM