So much not to miss on Twitter. It’s an elaborate gotcha game where now one tries to out-virtue the others by being the first to find ever more complex rituals surrounding the mask and the vaxx connected with, of course, attending Mass. 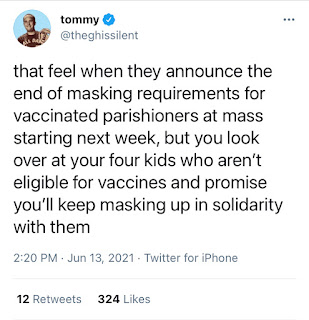 This is one of the many “Catholic” individuals who rushed, along with Gloria Purvis, to exploit a situation involving a priest you know getting “ratioed” because supporting modest dress at Mass by publicly kicking the priest to the curb via Twitter.
He apologized privately afterward.
Tiresome. Predictable. Forgettable.
My current Twitter profile where I have not posted for over a year: 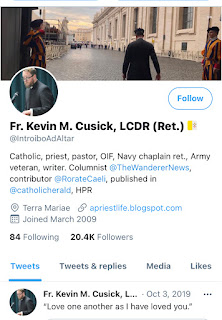 Posted by Father Kevin M Cusick at 8:07 AM