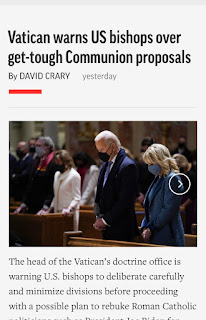 “The head of the Vatican’s doctrine office is warning U.S. bishops to deliberate carefully and minimize divisions before proceeding with a possible plan to rebuke Roman Catholic politicians such as President Joe Biden for receiving Communion even though they support abortion rights.”

Thus begins an article linked below that with incredible inversion quotes sources in Rome confusing unity and division by claiming those who would speak truth are dividing believers in the Church.

Unity is essential for the one Church founded by Christ who prayed “ut unum sint” to the Father. He is the Truth embracing which brings believers into an image of the holy Trinity in the Church on Earth.

Rome has recently cautioned US bishops against speaking the truth to power, after news that they plan to publicly call for Biden to abstain from Communion in light of his aggressive  abortion advocacy. He has even authorized use of American taxpayer funds to export abortion to other countries as well as using COVID legislation to send money to Planned Parenthood.

Life is sacred and the directly intended killing of procured abortion is a sin. Matrimony is between one man and one woman only. These are truths. They come from God. Rejecting these truths is rejecting God.

Thus the source of division and scattering of the flock are Biden and other baptized Catholics who support or procure abortions or advocate for sodomy or any redefinition of holy matrimony.

The US bishops who want to publicly correct and urge Biden to abstain from reception of holy Communion are sources of, and advocates for, unity which can be based only in truth and manifested by conformity to it.

Voices from Rome urging inaction in the face of the scandal and claiming that unity is the reason are causing confusion and are the real source of division.

The devil is the source of division.

Here is the report on Rome’s intervention in light of reports US bishops plan to craft a rebuke of Biden at their upcoming June meeting:

https://apnews.com/article/religion-058bdc0c37aa5ee780e18f4666a999ee
Diabolical to claim US bishops who discuss correcting Biden are source of “division”

Posted by Father Kevin M Cusick at 8:21 AM