For years people have argued that the alleged apparitions at Medjugorge must of necessity be authentic because one finds good fruits in evidence there. People going to confession, praying, rediscovering faith on pilgrimages there, it is argued, must be the result of the messages the alleged seers claim are from Our Lady.

The following from Catholic World Report makes clear why this is a mistake. Good fruits come from God sometimes despite the corrupt people or frauds in the Church. Numerous confessions and reconversions do not prove anything beyond the effect of cooperation with grace which can happen anywhere and does not depend on place or particular persons.

Despite the fact that the local bishop in Medjugorge has forbidden priests from leading pilgrimage there and has declared there is no evidence of supernatural apparitions millions have disregarded and disobeyed.

Add to this the scandals of disobedience and corruption among the Franciscan Friars who staff the church at Medjugorge, worked with the alleged seers and helped promote them. We are counseled to always flee sinful company yet people still flock there by the millions.

Obedience is a sign of charity and much lacking in our Church. Christ Himself obeyed the will of the Father in our redemption on the Cross and commanded we do the same. The pride operative in disobedience is sinful and gives an opening to the Evil One.

The case of Jean Vanier has opened the eyes of France to a secret world of heresy and abuse which the Vatican first encountered in the 1950s. Céline Hoyeau has documented and analyzed this world in La Trahison des Pères (The Betrayal of the Fathers). 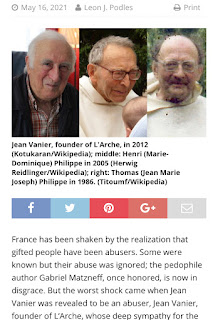