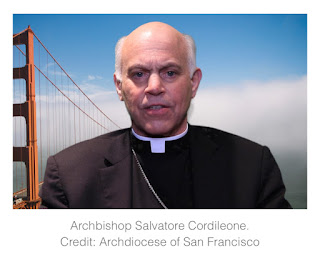 A move among certain bishops to delay discussing Eucharistic coherence at the upcoming USCCB June conference was sparked by a letter from Rome, but it turns out Cardinals Cupich and Tobin, leaders of the group calling for a delay in the discussion, visited CDW head Cardinal Ladaria in Rome shortly before he sent the letter calling for slowing down the procedure and even perhaps delaying discussion of the Eucharistic coherence as planned at the upcoming meeting.

In light of these facts Archbishop Cordileone has accused Cardinals Cupich and  Tobin of interfering with the bishops conference procedures as reported by the Pillar:

“Speaking to The Pillar, Archbishop Cordileone disputed the idea that Ladaria’s letter called for the bishops to drop their planned discussion.

“Noting that the discussion had already been approved by the USCCB administrative committee, Cordileone said the agenda for the June meeting was a proper expression of the wishes of the conference and correct procedure.

“Then we find out that Cardinal Cupich [of Chicago] and Cardinal Tobin [of Newark] are in Rome. Then shortly after that comes this letter from Cardinal Ladaria, that's being spun as if he's telling us to not go forward with this.”

“So there's this interference with the procedures of the conference,” said Cordileone.”

Posted by Father Kevin M Cusick at 8:10 AM