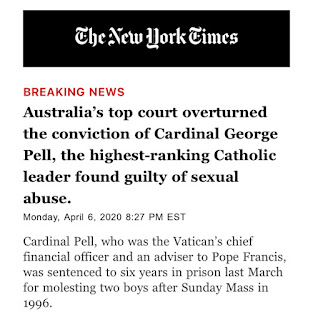 The Australian justice system is a joke, at least in the state of Victoria, and a very destructive one at that. Here is how the High Court in that troubled country described the preposterousness of the charges against him and of which he was found guilty:

"The assumption that a group of choristers, including adults, might have been so preoccupied with making their way to the robing room as to fail to notice the extraordinary sight of the Archbishop of Melbourne dressed 'in his full regalia' advancing through the procession and pinning a 13 year old boy to the wall, is a large one."

May God have mercy on the so many malign agents in the destruction of a good man of God’s reputation. Cardinal Pell responded in Christian character by saying he bears them “no ill will”.

Andrew Bolt’s commentary a must-see at this link: