They find out they’re ”called” to be women “priests” by going to, wait for it: services run by women priests!

Not Catholic in the least: Catholic sacraments require a valid matter and form. And you weren’t Catholic if you participate in a heretical sect that chooses the sex of priests over the necessity of receiving grace, the source of salvation and the purpose of the true Church.

On Good Friday one more example of Jesus betrayed:

"A DeLand resident followed her calling and became ordained as a Roman Catholic priest, which the Catholic Church declines to recognize." 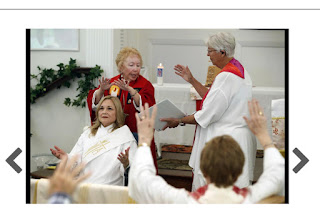 Human beings once again display a nearly limitless capacity for turning any subject matter into fodder for mere fantasy, including revealed Christian faith as preserved inviolate by the Church.
Posted by Father Kevin M Cusick at 6:05 PM