Sr Dede Byrne: “This is a battle between Our Lord and the devil”: Doctor-nun slams forced vaccines, communism

Sister Deirde Byrne, M.D., a retired U.S. Army officer and graduate of Georgetown University’s School of Medicine, said the push to force everyone to receive abortion-tainted COVID-19 shots ‘has a diabolic flavor to it.’ 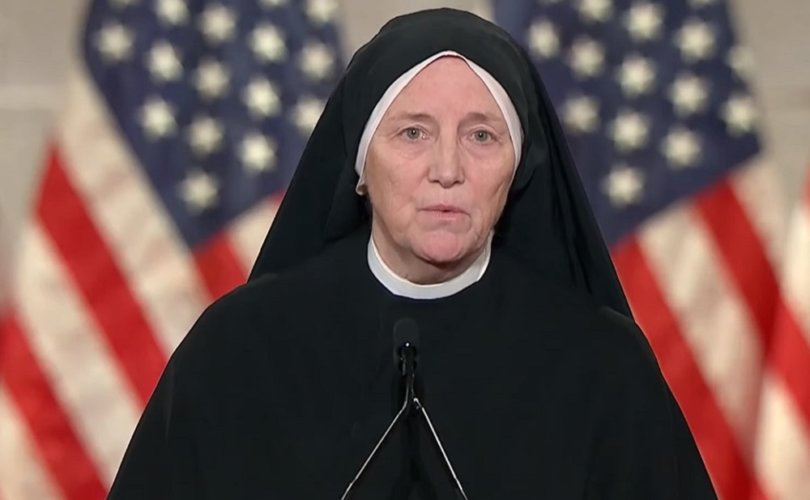 WASHINGTON D.C. (LifeSiteNews) — Religious sister, general surgeon, and U.S. Army veteran Sister Deirde Byrne, M.D. took the nation by storm last year when she appeared at the Republican National Convention in full religious habit to give a stirring pro-life address while wielding her weapon: the rosary.

Now Byrne’s message for America is to pray and remain in a state of grace in the face of experimental COVID-19 vaccine mandates and a government she fears is headed toward communism.

“This battle is not between the right and the left, it’s not between conservatives and liberals or Republicans and Democrats,” the retired Army colonel, who spoke at today’s “Stop the Shot” conference, told LifeSiteNews in an exclusive interview.

She added that “this is a battle between Our Lord and the devil,” and warned that everyone must choose a side.

After having earned her M.D. from Georgetown University and serving as an officer with the U.S. Army Medical Corps, Byrne fulfilled her religious vocation by becoming a sister with the Little Workers of the Sacred Hearts in Washington, D.C.

Sister Byrne holds a board certification in family medicine and general surgery and is a fellow of the American College of Surgeons. She currently serves as the medical director of the Little Workers’ Physical Therapy and Eye Clinic and is a volunteer surgeon for the Catholic Charities Medical Clinic in the Mount Pleasant neighborhood of D.C.

Byrne, whose military service took her to Korea and Egypt’s Sinai Peninsula, and who worked as a missionary surgeon in Haiti, Sudan, Kenya, and Iraq, told LifeSite that “common sense” preventive measures and therapeutic drugs can sharply reduce hospitalizations and deaths for patients with COVID-19.

“If we treat them early – early is the ticket – with ivermectin and hydroxychloroquine,” Byrne said, “80% of the people will not have to go to the hospital.”

But Byrne lamented that the treatments have been largely ignored in favor of experimental “vaccines” which have become increasingly mandated.

“That’s the shame of it all, that because this is an emergency mandate of vaccination, they’re trying to push it on everybody,” Byrne said, noting that emergency vaccination would only be necessary if there were a lack of effective therapeutics.

“We have therapy, and it’s proven therapy, and the powers-that-be, the government leaders here in the states, are ignoring this data.”

Byrne said that at the start of the pandemic she became aware that people were being sent home after getting a positive COVID-19 test without being directed to safe and effective drugs to prevent serious illness.

“As things started to unfold people started to reach out to me and tell me they were sick. I said, ‘well, are you on any treatment?’”

When her patients said they were not taking any treatments, Byrne said she “got them started.”

“I just said, ‘let’s get going on this,’” she said. “So we just sort of take the bull by the horns, and if a patient comes in and we have a therapy, we give it to them.”

But Byrne, whose medical clout includes having provided emergency care to war-torn Kurdistan with the Global Surgical and Medical Support Group, a non-profit founded to bring medical care to conflict zones across the world, has not been able to say much about her successes.

Despite her experience with the efficacy of common, safe therapeutics, Byrne told LifeSite that COVID patients treated at her clinic must be assisted “on the side without making a lot of noise about it.”

She mentioned that hydroxychloroquine, a safe drug routinely used as a prophylaxis for malaria and found useful for early treatment of COVID-19, has been restricted by some government leaders like New York’s Gov. Andrew Cuomo.

According to Byrne, “These governmental officials are making medical decisions [for] people, not allowing them to make their own decision about hydroxychloroquine, which is such a benign drug.”

When the treatments provided by Byrne and her fellow doctors and nurses have made patients well, Byrne said, “We just smiled when we saw the person getting better.”

With consistent success with early treatment using safe and effective drugs, Byrne said the focus on experimental COVID-19 “vaccines,” developed or tested using aborted fetal tissue, to the exclusion of proven therapeutics, has “a bit of a diabolic flavor to it.”

Describing the unprecedented power seized by unelected government officials during the pandemic, Byrne suggested COVID-19 shots are being mandated for “total control.”

“They want to force an experimental compound that we really don’t know the long-term effects [of]. Then they want to, on top of that, make sure everyone has a [vaccine] passport,” she said. “So, it’s total control of a populace. And that’s communism. We’re headed that way.”

Byrne, whose military service saw her tending to the medical needs of people living under harsh and totalitarian regimes, described the inherent atheism of communistic and socialistic systems, saying “those people hate God, because the people are not subservient to the government, they’re subservient to God. So this is competition.”

“Christians, people of good will, faithful people, who love God, love Jesus, and want to just do all for Him, and would even die for Him, [are] a threat to communistic, socialistic regimes,” she said.

Byrne suggested that the push to impose COVID-19 shots and mandatory proof of vaccination is related to an inversion of traditional morality that has beset the world.

“They’re all interrelated,” Byrne said. “It’s not only this whole thing with the vaccine mandate but it’s also the desecration of the most Blessed Sacrament, the Eucharist. And just even allowing people who are in a mortal state of sin to receive our Lord. And this would encompass people who are in a public arena who are promoting abortions, or euthanasia, or transgenderism.”

“It’s a web,” Byrne continued. “They’re not separate issues. These are diabolic concepts or issues that are affecting us at every level, and we have to pray. That’s the only way we’re going to fight all these issues.”

Byrne urged everyone, particularly those of faith, to resist fear.

“There’s a lot of people who are afraid out there. And we just have to assure them, to tell them that God is there with them and not to be afraid,” she said. “But we can’t give what we don’t have.”

“Our mission is to love Christ and to be with him, and we have to bring as many as we can with us,” she explained.

Finally Byrne warned that people must recognize the high stakes of the current moral and political situation in the U.S., particularly with regard to forced COVID-19 shots.

“If we are all forced to take an experimental vaccine – that has known high risk side [effects] for a disease that has low mortality – in which many religious and medical exemptions are being refused,” Byrne said, “we have lost what is most precious to all Americans, and that is our religious freedom.”

Posted by Father Kevin M Cusick at 8:05 AM