Saint Felicity in prison was eight months pregnant: “It was against the law for pregnant women to be executed. To kill a child in the womb was shedding innocent and sacred blood.”

Saint Felicity, already mother to seven sons, was pregnant in prison under Christian persecution with Perpetua and many others in crowded and dangerous conditions. 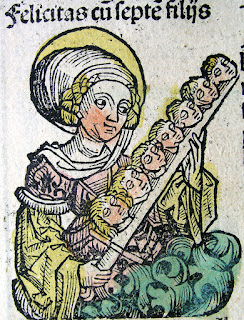 Even the pagan Romans believed the truth that many self-proclaimed heretic and apostate Catholics reject:

“It was against the law for pregnant women to be executed. To kill a child in the womb was shedding innocent and sacred blood.”

“Meanwhile, Felicity was also in torment...afraid that she would not give birth before the day set for their martyrdom and her companions would go on their journey without her. Her friends also didn't want to leave so "good a comrade" behind.

”Two days before the execution, Felicity went into a painful labor. The guards made fun of her, insulting her by saying, "If you think you suffer now, how will stand it when you face the wild beasts?" Felicity answered them calmly, "Now I'm the one who is suffering, but in the arena, another will be in me suffering for me because I will be suffering for him."
“She gave birth to a healthy girl who was adopted and raised by one of the Christian women of Carthage.”
https://www.catholic.org/saints/saint.php?saint_id=48