From the Roman martyrology for March 9:

“At Bologna, [in the year 1463,] the holy Virgin Katherine, of the Order of St. Clare, famous for the holiness of her life, whose body is there reverenced with great honour.”

Saint Catherine of Bologna was buried without a coffin and her body was exhumed eighteen days later because of many cures attributed to her at her graveside and the sweet scent coming from her grave. Her body was discovered incorrupt and remains so today. That means it has not decayed. Catherine is dressed in her religious habit seated upright on a golden throne behind glass in the chapel of the Poor Clares in Bologna.
Her skin has since been blackened due to exposure from oil lamps and soot. 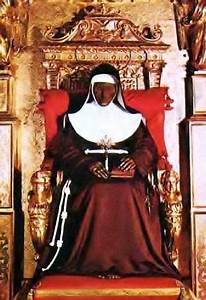 https://www.catholic.org/saints/saint.php?saint_id=111
Posted by Father Kevin M Cusick at 10:30 AM