Traditional AND practical: "The sedia gestatoria would protect the Pope" 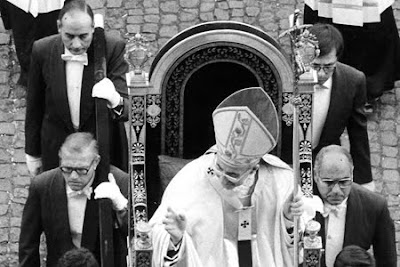 John Paul I was the last pope to be carried aloft by the sediari, or chairbearers. CNS file photo

Many years ago there was a joke doing the rounds of the pubs and clubs about two Irishmen on pilgrimage in Rome who ask at a bar near the Vatican what the Pope likes to drink. Upon being told he likes Crème de Menthe the two intrepid drinkers order two pints of the stuff.

Several hours and a lot of pints later both are lying comatose in the street. When they eventually come around one says to the other: "No wonder they carry him around in a chair!"

On a more serious note, the attack on Pope Benedict during the entrance procession of Midnight Mass by Susanna Maiolo, a mentally ill woman who once again, as she did last year, vaulted over the barriers before lunging at the Pope, poses serious questions about the Holy Father's safety.

Since 1970 alone there have been three documented attempted assassinations of the Pope. In 1970 Pope Paul VI was attacked by a man with a knife at Manila Airport, in 1981 there was the shooting of Pope John Paul II in St Peter's Square and only a year later, when the same Pope visited Fatima to give thanks for his survival, he was attacked yet again by a deranged knife-wielding priest.

Aside from Pope Benedict's annual Christmas encounters with Miss Maiolo there was the attempt by a German man to get into his Popemobile during an audience in 2007. After these incidents and the rise of Islamic terrorism since 9/11 there have been many noticeable changes to the security surrounding the Pontiff.

Long gone are the days when it was deemed enough for Archbishop Marcinkus to stand next to the Pope as a kind of clerical "heavy". On all his travels around the world now the Pope is accompanied by armed close-protection officers from the 130-strong Vatican Corps of Gendarmes who accompany him and work with the close-protection teams afforded by the Italian state and the particular host country. His Popemobile is fitted with bullet-resistant glass and his movements by limousine are handled in exactly the same way as any head of state, with armed officers travelling with him and in a support vehicle. When the Pope visited Turkey he was even asked to wear body armour under his overcoat.

At every papal ceremony in St Peter's when the Pope is required to walk through the crowded basilica to reach the sanctuary it is possible to see not only his personal protection officer Domenico Giani, (who has been Inspector General of the Corpo della Gendarmeria since 2006), walking nearby but also other black-suited, close-protection officers walking at the sides of the procession. Indeed, the Pope's close-protection team are to be congratulated that one of their number seized Miss Maiolo as she leapt the barrier but the distance between the barrier and the Pope was so small that, ironically, it was the force of this officer tackling her at the very moment she grabbed at the Pope's vestments that actually brought the Pontiff crashing to the floor.

For these protection officers the security of their principal can never be guaranteed particularly when, like the Pope, he wants to be visible to the crowds who have turned out to see him and a degree of compromise is always required. Unlike a president or prime minister whose close-protection officers are usually found within an arm's reach of their principal, as any press photograph taken during a walkabout will show, the Pope is frequently engaged in liturgical acts which have no rubrical provision for an armed suited man wearing an ear-piece to be in the midst of things. That said, as with much of this pontificate the answer to this particular problem might just be found from recovering something from the past.

One only has to look at old black and white footage of pontiffs prior to Paul VI to see how popes always used to enter the basilica being carried shoulder high in the sedia gestatoria. Not only that, but there was always a throng of people around the chair, not only the actual bearers but numerous chamberlains and nobility and a large number of guards: Swiss Guards, uniformed Gendarmes, the Palatine Guard and Noble Guard. These comprised the old papal court which Pope Paul VI abolished and which formed a kind of buffer zone between the Pope and the crowds, no doubt as much a practical defence measure as a piece of ceremony.

The use of the sedia continued until very recently and many are unaware that the last pope to use the sedia was actually Pope John Paul I. While the abolition of this ancient form of transport may have since been considered appropriate in the context of the late 20th century and the need to democratise the appearance of papal ceremonies, the reality has left the Pope an isolated and vulnerable figure separated from the deacons ahead and the MCs behind, one who appears all too often like the figure in the Third Secret of Fatima: a victim walking alone simply waiting to be attacked.

While there are bound to be some who would see the return of the sedia as yet another example of this Pope "turning the clock back", in fact not only would it save an elderly man's tired legs but it would allow more of the crowd to see him. Most importantly, it would actually insulate him from the kind of physical assault we saw at Christmas by virtue of the mob of people surrounding it (who could these days be swelled by Swiss Guards and the gendarme officers in suitably formal garb) to work alongside the suited officers at the perimeter.

Naturally, the risk of attack from a gunman or explosive device would still be present and indeed potentially magnified by the sedia but the use of X-ray machines at the entrance to the basilica and physical searches of congregants should by now be mandatory at such events to confront these risks which are no more heightened by the Pope presiding at Mass from an elevated platform, as he does, than from being carried in a chair.

It was being reported earlier in the year on several Catholic blogs that the Vatican was actively considering a return for the sedia gestatoria for ceremonies in St Peter's, more because of the Pope's age than as a protection against attack. Perhaps the latest incident will persuade them that what tradition hands down frequently has a practical origin beyond merely the visually impressive spectacle that to sceptical modern eyes it had appeared to have become.

Dominic Scarborough is a regular commentator in the press and internet on Catholic affairs. His company, Proteus Risk, advises companies on security issues

Posted by Father Kevin M Cusick at 9:33 AM