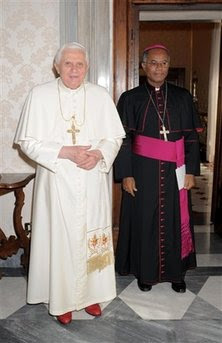 In this undated photo released by the Vatican's L'Osservatore Romano newspaper Wednesday, Jan. 13, 2010 Pope Benedict XVI meets Archbishop Joseph Serge Miot in his private library at the Vatican. Archbishop Joseph Serge Miot, 63, was found dead in the ruins of his office in Pourt-Au Prince, Haiti, said the Rev. Pierre Le Beller of the Saint Jacques Missionary Center in Landivisiau, France. A powerful earthquake crushed Tuesday thousands of structures, from schools and shacks to the National Palace and the U.N. peacekeeping headquarters.(AP Photo/ L'Osservatore Romano, Ho) 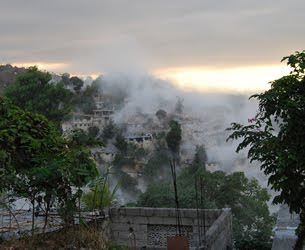 Food For The Poor is responding to the devastation caused by yesterday's deadly earthquake, which hit about 10 miles outside of the Haitian capital of Port-au-Prince. The earthquake had a preliminary magnitude of 7.0.

We at Food For The Poor want to relay the following to our donors and to loved ones of those who may be affected:

Food For The Poor will continue to do everything we can to reach out to the suffering people of Haiti — and we’ll keep you updated as we learn new information. Thank you for your compassionate support.

Ministry Watch has given FFP five stars, its highest rating.

Charity Navigator has given FFP four stars, its highest rating.

Forbes Magazine Food For The Poor’s fundraising efficiency ratio of 97% contrasted with an industry average of 90%.

Fundraising and other administrative costs comprise less than 4%; more than 96% of all donations go directly to programs that help the poor.