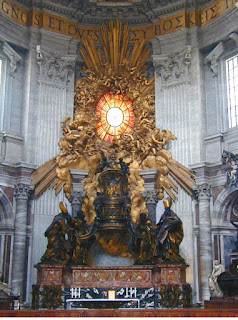 Homily by St. Hilary, Bishop of Poitiers.Commentary on Matthew xvi.“The Lord asketh His disciples who men say that He is, and He addeth, He, the Son of Man. Let us ever remember to hold fast this truth of our profession, namely, that the Son of God is the Son of Man also. Were He one and not the other, then were He no Saviour for us. The Lord then, having heard the various opinions of men, asketh, But Who say ye that I am? And Simon Peter answered and said Thou art the Christ, the Son of the living God. Peter had weighed the questions. The Lord had asked, Who do men say that I, the Son of Man, am? That He was Son of Man was sufficiently evident to all who looked upon His Body. But when He spake of His whole Self, and asked, Who do ye say that I am? He showed that the mind had something to grasp beyond That Which was seen, for Son of Man He was manifestly. What judgment did He wish them to give? I think it was not /that which He had owned concerning Himself. That something more, which He wished them to own, was a hidden thing, whereunto the faith of them that believed in Him was to reach.
“Peters confession was followed by a proper reward for having seen the Son of God in the Son of Man. Blessed is this holy Apostle, in whose praise it is said that he saw with more than human eyes That Which was unseen, who gazed upon Flesh and Blood, and by the secret revelation of the Heavenly Father recognised the Eternal Son of God; who was the first thought worthy to acknowledge the Divinity of Christ. {Here, if necessary, the Lesson is divided.) God bless thee, O Peter, thou who by uttering for the first time the title of Divine honour, didst lay the goodly foundation of the Church! God bless thee, thou worthy rock whereon she is built, for ever triumphant over the infernal powers, the gates of hell, and the bands of death! God bless thee, happy door-keeper of heaven, to whose keeping are given the keys of the everlasting mansions, whose sentences on earth are already confirmed in heaven so that whatsoever thou shalt bind on earth shall be bound in heaven, and whatsoever thou shalt loose on earth shall be loosed in heaven.”
Pray for Peter’s Successor today, that he will be faithful to the same Creed in all it’s details first entrusted to Peter and to all the apostles by Christ when he conferred the keys upon Peter.
Posted by Father Kevin M Cusick at 8:54 AM