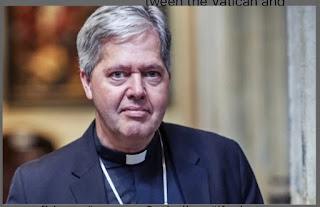 Archbishop Roche’s application document for Traditionis custodes has “hardened the front" between the Vatican and the Catholics, is "highly aggressive," and a “pastoral faux pas,” Dutch Auxiliary Bishop Rob Mutsaerts writes on his VitamineXp.Blogspot.com (January 3).

He notices a “barely concealed impatience" to wipe out the Roman Mass. “The ‘pope of mercy’ shows little mercy for those who embrace the Traditional Latin Mass.”

Mutsaerts locates an increasing “loss of confidence” among Catholics, “If what was recommended yesterday no longer applies today, nothing is certain.” He asks if “everything from before Vatican II is deleted.”

The faithful may receive the Roman Rite sacraments of confession and marriage at the Society of PiusX, he stresses, but not in canonically recognised communities such as the Fraternity of St Peter.

Further, priests who occasionally celebrate the Roman Rite must explicitly endorse Vatican II while "those celebrating the Novus Ordo - I am one of them - are not asked to accept the Council of Trent.”

His conclusion, “If the Vatican mandates an inspection for celebrants of the Old Mass, in fairness, it should also be mandated for [the legions of] freelance-celebrants of the Novus Ordo who are all doing their own thing.”