Statement of Father Philippe Laguérie, founder of the Institute of the Good Shepherd 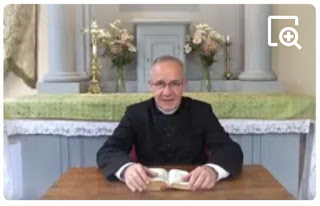 "Despite the attempt, which today can be defined as a failure, under Benedict XVI, to restore its rights to the Church's two-thousand-year liturgy, ecclesiastical personnel have remained and remain fundamentally revolutionary.""Here we are back to the seventies, to the suspensions a divinis, to the ‘savage seminary’, to the ‘excommunications’. There is a smell of dust.
"I must express myself clearly, after a period of diplomatic silence. I am among those who think that our absolute rejection of the Mass of Paul VI is not affective, nor disciplinary, nor charismatic, etc. It is theological, theological, dogmatic and moral. Absolute! The original sin of this deplorable liturgical dispute within the Church is the unspeakable and insane audacity of Pope Paul VI in promulgating a Novus Ordo Missae based on the research of experts, F... M... [Freemasons] and Protestants, throwing away (with trembling voice) the Mass of the popes Leo and Gregory, both great.
“The Catholic liturgy cannot and must only be a transmission of the legacy of the Apostles. A Mass invented 19 centuries later can only be a Promethean ambition, a romantic-libertarian chimera, a bad taste populism, unworthy of the Church of Jesus Christ.
“The promulgation of Paul VI's Novus Ordo Missae is undoubtedly legal and valid, but certainly not legitimate. In this crisis, the position of each one is very instructive: those who get by through ecclesiastical diplomacy and ecclesiastical circles will end up drowning. Only fans of the truth will survive. Having spent my life fighting, I am happy to see that I am preparing to die not as a deserter but as a soldier."
"The ‘battle’ for the Catholic Mass was definitively and irreversibly won by Msgr. Lefebvre in the 1980s. What's done is done! There are tens of thousands of priests in the world who celebrate the Gregorian Mass, and a hint from some Roman secretary or some residential bishop who works ‘overtime’ will not be enough to change things. It is too late: we have won the battle. I am not among those who speculate on a heart attack or a pope's syncope: I would find him miserable, and the gambler risks paying the price of his bet. On the contrary, I know that ALL the priests I know (starting with me) will never go to this Mass which has ruined the Church of the West, of America and of Africa. It will be easier for Macron to vaccinate fetuses than for Francis to impose the synoxis of Paul VI on us.”
Posted by Father Kevin M Cusick at 5:01 PM