The two primary denominations in Germany, Catholic and Lutheran, derive their support by means of direct payment by taxpayers who designate where their church offerings go. This is known colloquially as “kirche geld.”

German “Catholic” bishops don’t want to lose kirche geld as attendance falls and antipathy takes the place of apathy so they are now combining with Lutherans to shed anti-Catholic bias. They will accomplish this by giving away the Body of Christ for the new version of “thirty pieces of silver”. Lutherans and, in effect, anyone at all will now officially receive Holy Communion at Catholic Masses regardless of their relationship, real or nonexistent, to Catholic faith and morals.

The bishops are accelerating this practical apostasy by inviting heretics to receive Communion, and signaling approval of open Communion to the Church generally, at an upcoming ecumenical event. See screenshot of article by Gloria.tv below. Full post is at link following this post.

Their race to embrace LGBT and every other new weird heresy is further evidence of their fight for financial survival as novus ordo church implodes on their watch. Or, rather, under their neglect and malfeasance.

Where did you think their retirement pensions are going to come from?

It’s obvious. Don’t give them credit for being imaginative. They would have figured out how to remain Catholic if they had functioning intellects. 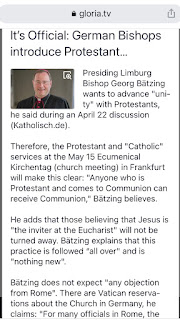