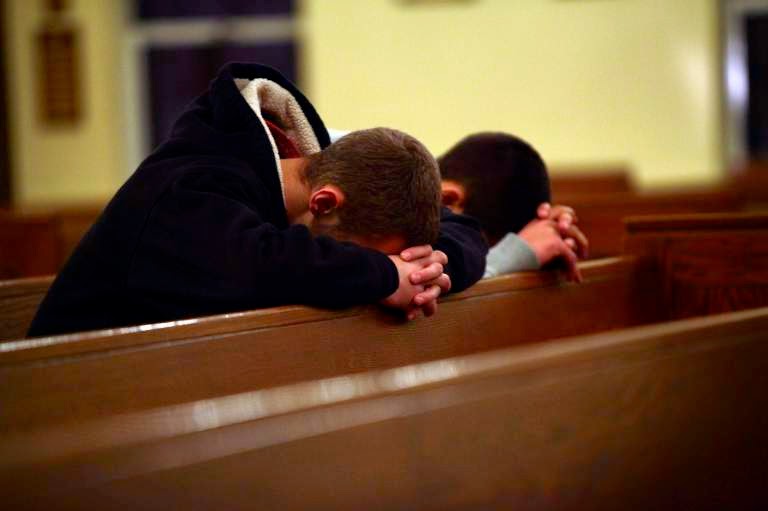 I can’t remember where I came across this riveting Civil War question, “Why didn’t the Civil War soldiers turn in battle when facing canons loaded with canister?” I often wondered how men kept marching forward in the face of near-certain death by having their flesh mercilessly shredded. Surely there was uncommon valor and bravery. Yet, was there another dynamic moving them forward in the face of a hideous death?

Civil War soldiers marched into battle in units composed of men from their hometowns and home states. If a man turned in battle, his cowardice meant that he couldn’t go home as a man. His reputation was on the line. The vast majority of soldiers facing canister preferred to lose their lives rather than lose their manhood.

Many Catholic Church leaders desperately need to learn a critical lesson from Civil War soldiers. Men have a deep divinely-embedded instinct to preserve their masculinity and thus are repulsed by feminized and homosexual-friendly environments.

Leon Podles in his important book, The Church Impotent: The Feminization of Christianity, states: “If the feminization of the Church continues, men will continue to seek their spiritual sustenance outside the churches, in false or inadequate religions, with high damaging consequences for the church and society.

The current attempts, within almost all Christian denominations, to normalize homosexuality will, more than anything else, convince heterosexual men that religion had best be kept at a great distance. Catholic churches that cultivate a gay atmosphere (Archdiocesan Gay and Lesbian Outreach, gay choirs, gay tolerance talks in schools) will keep heterosexual men away. Fear of effeminacy is one of the strongest motivations in men who will sometimes die rather than appear effeminate.”

Millions of Catholic wives wonder why their husbands don’t want to go to Mass with them. Likewise, thousands of bright and beautiful young Catholic women wonder aloud, “Where are the marriageable young Catholic men?” I’m afraid it’s goodbye to many good men because of the effeminate atmosphere of the contemporary Catholic Church. The contemporary homosexualized church atmosphere is the penultimate level of feminization, and it stinks in the nostrils of normal men.

Reporting on the defective interim report of the Family Synod, the secular media was delighted to broadcast worldwide that there is a pro-gay seismic shift in the Catholic Church. While the final report of the Synod backtracked on the morally defective statements on homosexuality and communion for those living in adulterous relationships, make no mistake, the lasting worldwide damage is done. For the man on the street, the Catholic Church is just one more institution caving in to our culture’s gay-friendly transformation.

It’s important to keep in mind that the public perception of the Catholic Church’s pro-gay drift hasn’t just grown out of news reports from the Family Synod. A long train of events and declarations have supported the pro-gay drift of the Catholic Church. I’ll mention just a few of the disastrous statements and actions leading up to the Family Synod’s interim report. > > Despite the denial of a few within the Church, literally the entire world knows that the Catholic clerical crisis was mainly a homosexual crisis. The striking failure of so many bishops “to connect the dots” as they moved homosexual abusers from parish to parish revealed a lot about the moral framework of many leaders.

A Barna Catholic youth 2013 survey reported, “Among all 18-29-year-olds who have a Catholic background, 43% say the “priest abuse scandals have made me question my faith.”

The big bombshell was the media’s out-of-context reporting of Pope Francis’ statement, “Who am I to judge?” His question is emblazoned on the tee-shirts of homosexual activists. While I fully realize that the context of his answer was deliberately ignored, or misinterpreted, nevertheless, his answer convinced millions of youth and young adults that the Catholic Church is now “ok” with sodomy.

The Catholic press may publish lengthy articles listing the seven reasons why the Pope’s answer was taken out of context (and it was), but young people are not reading these articles! They are just skimming the headlines and reading a few sentences on their smartphones. At colleges and universities, both Catholic and Protestant students are asking, “Why is Pope Francis pro-gay?”

The Church is certainly right to reach out in mercy to homosexuals, couples having children out of wedlock, couples remarried outside the Church after divorce, and couples fornicating. Yet, such a merciful outreach needs to be carefully balanced with truth. Otherwise, the message that’s received is that the Catholic Church is finally ok with the full spectrum of the sexual revolution. Such a distorted message in today’s sex-saturated culture will catapult millions of youth and adults into the claws of the sins of the flesh.

In case anyone in the United States had any lingering doubts about the homosexual-friendly atmosphere in the Catholic Church, Cardinal Dolan dispelled them when he agreed to be the Grand Marshal of the annual St. Patrick’s Day Parade in New York City. In his announcement he said that he welcomes the inclusion of a homosexual group. This is an out-of-the-closet group of NBC’s homosexual activists marching under a homosexual banner with the cardinal’s blessing.

Never before in the history of this annual parade, which first took place on March 17, 1762, has an in-your-face group of militant homosexuals marched carrying a homosexual banner. Rest assured that next spring Cardinal Dolan’s being ok with the homosexual activist participation in this parade will be broadcast coast to coast in the secular media. Oh, I almost forgot Cardinal Dolan’s widely reported exclamation of “Bravo” in response to a news story about a professional athlete who came out of the closet. Bravo? What was he thinking? Most men seeing the homosexual NFL player kissing his little boyfriend on ESPN were repulsed.

Then there’s the utterly strange case of Cardinal Christoph Schönborn, the primary author of the Catechism of the Catholic Church. One would imagine that Cardinal Schönborn of all people would be able to discern a genuine view of human sexuality from a corrupt one. Cardinal Schönborn complimented two practicing homosexuals in Vienna who allegedly live in what he said is “lifelong fidelity.” The cardinal said things like: “It was wonderful, in a human way as much as in a Christian way, how one was taking care of the other.” He added: “Such things must be recognized.”

Questioned on the Church’s attitude to homosexuals, the cardinal said: “We should give more consideration to the quality of homosexual relationships,” while adding: “A stable relationship is certainly better than if someone chooses to be promiscuous.”

In April 2012, the election of a young gay man who was living in a registered same-sex partnership to a parish council in Vienna was vetoed by the parish priest. After meeting with the couple, Cardinal Schönborn reinstated him. He later advised in a homily that priests must apply a pastoral approach that is "neither rigorist nor lax" in counselling Catholics who "don't live according to [God's] master plan".

Since 2006, the cardinal has allowed active and unrepentant homosexuals to be “blessed” in his cathedral on St. Valentine’s Day.

The Fatal-to-the-Family Vatican Synod interim report was just one link in a long chain of indicators revealing a growing pro-gay atmosphere in the Catholic Church. While faithful Catholics were understandably troubled by the interim report, not everyone was.

It is instructive to read the comments of retired Anglican Bishop Gene Robinson on the Vatican Family Synod’s interim report published in The Daily Beast. Bishop Gene Robinson earlier in life was married and had two daughters. He divorced his wife. While openly living in a gay relationship he was consecrated as an Episcopal bishop. In 2014 Bishop Robinson announced the end of his “marriage” to partner Mark Andrew.

Bishop Robinson, writing about the Family Synod said: “With respect to homosexual people, there is a decidedly changed tone. No wonder gay and lesbian people feel like it’s a new day! No mention of sin here. No reiteration of official Catholic policy and teaching that homosexual persons are ‘intrinsically disordered.’ And most positive of all, there is mention that our unions may (emphasis added) contribute ‘gifts and qualities’ beneficial to the Body of Christ.”

You can be sure that the active homosexual community was joyful upon hearing the interim summary report from the Family Synod, while many faithful bishops and laity were appalled. Despite the Family Synod’s backtracking in the final report, we can be sure the damage from the worldwide broadcast of the initial report will be lasting and profound. In the popular mind, the Catholic Church finally caved to the sexual revolution. The Family Synod has given the appearance that the last worldwide moral restraint on sexual sin has given way.

At the fall 1980 Synod of Bishops, Pope John Paul II was asked by the Synod fathers to prepare something to aid the family. The result was, The Role of the Christian Family in the Modern World [Familiaris Consortio]. This document was the primary cause for my conversion to Catholicism in 1990.

The Role of the Christian Family in the Modern World is faithful to Jesus’ teaching about marriage and divorce, timeless Catholic doctrine, and human sexuality, while being charitable to families and marriages in all situations. If you haven’t read it, I urge you to do so now.

After hearing John Paul II speak on the importance of the family in 1991, I launched the Family Life Center International in 1992. For the past twenty-two years, it has been a joy and privilege to urge families worldwide to heed his advice and counsel on marriage, family life, and human sexuality.

Now with the moral earthquake created by the 2014 Synod of Bishops, I’m forced to warn those same families about mixed signals, defective reports, and dangerous statements regarding homosexuality. In an attempt to deal with the crisis of the family in the modern world, the Cardinal Kasper coalition at the Family Synod has created one.

My heartfelt wish is for the 2014-2015 Family Synod to re-adopt Saint John Paul II’s The Role of the Christian Family in the Modern World and formally recognize it as the finest tool to deal with the contemporary crisis in family life. Please, no further action is needed!

My plea to those in Catholic media is, “Please don’t put a happy face on this tragedy.” We’ve had enough Catholic-spin on the homosexual drift within the Catholic Church. The Church is in the midst of a full-scale crisis and the first step in healing and defending her is an honest and forthright diagnosis. In a nutshell, the problem is the sexual revolution and sodomy among many inside the Church.

Tragically, the Family Synod modernists have set Catholic fatherhood backwards for our lifetime. It will be Catholic families, wives, children, and single young women who feel the brunt of men of all ages repulsed from the Church because of the sodomite smoke seeping from its midst.

Yours in His Majesty’s Service on the Feast of St. John Paul II,


Steve Wood
Posted by Father Kevin M Cusick at 9:58 AM