"The President and the Pope": On the occasion of the 100th Anniversary of the birth of Ronal Reagan 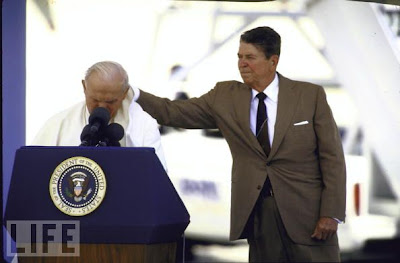 The Verdict of History
"Among the more lasting impressions conveyed by these papers is the sheer deference showed by Reagan’s working-level staffers toward the pope, even when the two sides were at odds over policy. Admiration for this pope’s spiritual leadership has stripped Protestant White House staffers of any evident cynicism. They pun about a papal "missile" on disarmament, but are in dead earnest in their respect, and at times even reverence, for the Holy Father. Reagan himself, in his letters to Pope John Paul II, admits to being uniquely inspired by the leadership of the pope. The letters have an intensely personal quality, a warmth and light, which is striking when compared to the no less sincere, but far more formalistic, expressions of solidarity made by FDR to the World War II pope, Pius XII.

"The geopolitical dynamic would of course soon change, during Reagan's second term, with the 1985 ascent of Gorbachev. Historians will debate the extent to which Soviet changes were sparked by the insistence, of both Reagan and John Paul, on the fundamental importance of the dignity of the human person. But when the Soviets faced these two leaders of shared purpose and conviction, they faced their worst-case scenario: a moral-political meta-power. As Cardinal Silvestrini had said, “The two planes (politics and morality) can be complementary when they have the same objective.” That there was no formal Vatican alliance with the West only gave the pope’s moral stance all the more weight. Perhaps, ultimately, that was part of the essential genius of his policy."

— Mark Riebling is the author of Wedge: From Pearl Harbor to 9/11: How the Secret War Between the CIA and FBI Has Endangered National Security. He blogs here.
Posted by Father Kevin M Cusick at 3:01 AM