"... the sheer fixation on the condom implies a banalization of sexuality": Reading "The Light of the World" by Pope Benedict 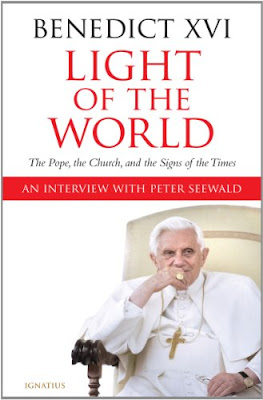 "As a matter of fact, you know, people can get condoms when they want them anyway. But this just goes to show that condoms alone do not resolve the question itself. More needs to happen. Meanwhile the secular realm has developed the so-called ABC Theory: Abstinence - Be Faithful - Condom, where the condom is understood only as a last resort, when the other two points fail to work. This means that the sheer fixation on the condom implies a banalization of sexuality, which, after all, is precisely the dangerous source of the attitude of no longer seeing sexuality as the expression of love, but only a sort of drug that people administer to themselves. This is why the fight against the banalization of sexuality is also a part of the struggle to ensure that sexuality is treated as a positive value and to enable it to have a positive effect on the whole of man's being."