Benedict Sunday Morning: The Solemnity of Jesus Christ, King of the Universe 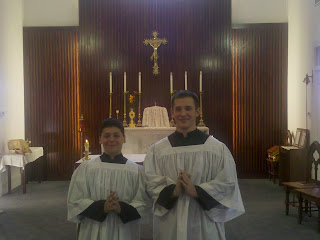 "I will go up to the altar of God, the God who gives joy to my youth."

A special word of thanks goes to Michael (left) and Pete who served holy Mass for the Solemnity of Christ the King at Saint Francis de Sales Catholic Church in Benedict, Maryland this morning.

Solemnity of Jesus Christ, Universal King: “The Rulers Sneered at Jesus” and Still Do

“The rulers sneered at Jesus and said, ‘He saved others, let him save himself if he is the chosen one, the Christ of God.’ Even the soldiers jeered at him … one of the criminals hanging there reviled Jesus”.

In our liturgy of holy Mass for the Solemnity of Christ the King the sacred Scriptures take us back to the day on Calvary’s hill and into the presence of Our Lord who, dying on the Cross, accomplishes the perfect will of the Father for our salvation. We hear once again of those who stood, unbelieving, and watched Him breathe his last without a hint of sympathy and, much the opposite, sneered and ridiculed Him in most egregious acts of blasphemy which Our Lord forgave even with His last few words.

What is royal or kingly about this One who dies the death of a criminal, abandoned by those He loved, ridiculed and derided by those who pass Him by? Jesus Christ is the perfect Suffering Servant because His Kingdom is of justice, love and peace.

"Finally, the People of God shares in the royal office of Christ. He exercises his kingship by drawing all men to himself through his death and Resurrection. Christ, King and Lord of the universe, made himself the servant of all, for he came 'not to be served but to serve, and to give his life as a ransom for many.' For the Christian, 'to reign is to serve him,' particularly when serving 'the poor and the suffering, in whom the Church recognizes the image of her poor and suffering founder.' The People of God fulfills its royal dignity by a life in keeping with its vocation to serve with Christ. The sign of the cross makes kings of all those reborn in Christ and the anointing of the Holy Spirit consecrates them as priests, so that, apart from the particular service of our ministry, all spiritual and rational Christians are recognized as members of this royal race and sharers in Christ's priestly office. What, indeed, is as royal for a soul as to govern the body in obedience to God? And what is as priestly as to dedicate a pure conscience to the Lord and to offer the spotless offerings of devotion on the altar of the heart?" (CCC 786)

Today the sneerers and the revilers are still among us. These are the host of ridiculing unbelievers, some among the elite and ruling classes: kings and king-makers, politicians who claim the mantle "Catholic" or "Christian" but who spurn the moral teachings of Christ and do as they please in disposing of human life through crimes such as abortion or embryonic stem cell research and take part in the ridiculous and laughable pretense that holy matrimony can ever be anything other than a lifelong union between one man-husband and one woman-wife. There are also those who in pride stand aloof from the Lord and His Church because of the sinners in her midst, who ridicule Him dying once again in His martyrs such as we have recently witnessed in Baghdad, who are indifferent to Him as He suffers once again in the starving and choleric poor dying in Haiti, who blaspheme once again in the attacks on our holy Faith, who malign the Pope and believers without examining the facts.

For the full text of this Sunday reflection, please click here to go to Meeting Christ in the Liturgy.