My latest column: “The Legacy of BXVI” 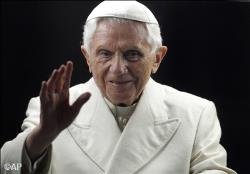 At the end of Pope Benedict’s earthly sojourn with his death on the last day of 2022, we are moved to look back with gratitude upon his life and legacy. It is indeed a rich one, blessed with a fruitfulness indicating the Lord’s good pleasure in the labors of his humble servant.

At the cusp of a new year it was as if, with his last breath, our beloved Pope Emeritus delivered his final homily about the brevity of our lives in comparison with the great treasure of the eternal Kingdom which awaits us. His words were always carefully and lovingly chosen, with a desire to effectively communicate the Lord and His Gospel. In the end we witness the truth that it was in fact his life that was, of all his works, the most eloquent.

The sadness we experience at his passing is mixed with the joy of having known him and benefited from his gifts. He was brought by the Lord’s Providence from his native Germany to the heart of the Church in Rome where he faithfully served his good friend Pope John Paul II for many years. A guardian for the right teaching of the faith, he was trained well for his greatest role of humble servanthood in the vineyard which he accepted upon his election as Supreme Pontiff.

He first came to my attention many years ago when, as a young Army officer on active duty in Texas, his book-length interview, first known as The Ratzinger Report, made something of a ripple in the popular press. I obtained a copy through interlibrary loan from Southern Methodist University and read it with great curiosity.

I had been at that time continuing my discernment of the priesthood while serving in the military to “pay back” my four-year college scholarship. I was experiencing some skepticism as do many,there always being plenty of bad news about people in the Church, sinners all that we are. 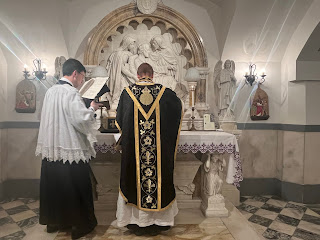 Traditional Requiem Mass offered for the repose of the soul of Pope Benedict XVI in New York by a young priest ordained in 2020.
Posted by Father Kevin M Cusick at 3:11 PM