All Souls Day: “It is a good and holy thought to pray for he dead” 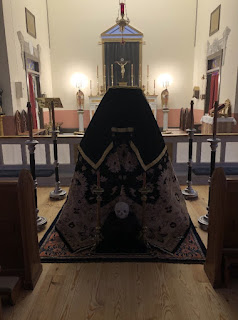 From the book of St. Augustine, the Bishop, on the Care for the DeceasedCap. 2 & 3If this be true, doubtless also the providing for the interment of bodies a place at the Memorials of Saints, is a mark of a good human affection towards the remains of one's friends. Yet it follows not that the bodies of the departed are to be despised and flung aside, and above all of just and faithful men, which bodies as organs and vessels to all good works their spirit has holily used. For if a father's garment and ring, and whatever such like, is the more dear to those whom they leave behind, the greater their affection is towards their parents, in no wise are the bodies themselves to be spurned, which truly we wear in more familiar and close conjunction than any of our putting on. For these pertain not to ornament or aid which is applied from without, but to the very nature of man. Whence also the funerals of the just men of old were with dutiful piety cared for, and their obsequies celebrated, and sepulture provided: and themselves while living did touching burial or even translation of their bodies give charge to their sons.
And when this affection is exhibited to the departed by faithful men who were most dear to them, there is no doubt that it profits them who while living in the body merited that such things should profit them after this life. But even if some necessity should through absence of all facility not allow bodies to be interred, or in such places interred, yet should there be no pretermitting of supplications for the spirits of the dead: which supplications, that they should be made for all in Christian and catholic fellowship departed, even without mentioning of their names, under a general commemoration, the Church has charged herself withal; to the intent that they which lack, for these offices, parents or sons or whatever kindred or friends, may have the same afforded unto them by the one pious mother which is common to all. But if there were lack of these supplications, which are made with right faith and piety for the dead, I account that it should not a whit profit their spirits, howsoever in holy places the lifeless bodies should be deposited.
Which things being so, let us not think that to the dead for whom we have a care, any thing reaches save what by sacrifices either of the altar, or of prayers, or of alms, we solemnly supplicate: although not to all for whom they are done be they profitable, but to them only by whom while they live it is obtained that they should be profitable. But forasmuch as we discern not who these be, it is meet to do them for all regenerate persons, that none of them may be passed by to whom these benefits may and ought to reach. For better it is that these things shall be superfluously done to them whom they neither hinder nor help, than lacking to them whom they help. More diligently however does each man these things for his own near and dear friends, in order that they may be likewise done unto him by his. But as for the burying of the body, whatever is bestowed on that, is no aid of salvation, but an office of humanity, according to that affection by which no man ever hates his own flesh. Whence it is fitting that he take what care he is able for the flesh of his neighbor, when he is gone that bare it. And if they do these things who believe not the resurrection of the flesh, how much more are they beholden to do the same who do believe; that so, an office of this kind bestowed upon a body, dead but yet to rise again and to remain to eternity, may also be in some sort a testimony of the same faith?
Posted by Father Kevin M Cusick at 8:40 AM