Fortnight for Freedom: Reflection Day One 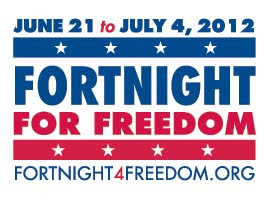 The Vatican Synod declares that the human person has a right to religious freedom. This freedom means that all men are to be immune from coercion on the part of individuals or of social groups and of any human power, in such wise that in matters religious no one is to be forced to act in a manner contrary to his own beliefs. Nor is anyone to be restrained from acting in accordance with his own beliefs, whether privately or publically, whether alone or in association with others, within due limits.

Reflection for Day One

In the opening chapter of Declaration on Religious Liberty, the Council Fathers at Vatican II forthrightly declared that “the human person has a right to religious freedom.” This right is founded upon the intrinsic dignity of the human person. From God’s revelation we know that the dignity of human beings resides in their being created in the image and likeness of God (Gn 1:27). Like God we are intelligent beings with free will. Because of this we can know the truth and perform God-like actions, such as being loving, kind, forgiving, etc. Reason itself, in knowing what a human being is, confirms that we possess a dignity and worth that exceeds the rest of creation and that cannot be violated, but rather needs to be protected and fostered.

What human beings believe concerning God is of supreme importance. Religious belief lies at the very center of who we are in relation to what is most central and cherished in our lives. Therefore, the Council insists that the religious convictions of individuals or groups should never be coerced but must be held freely, protected by a civil constitutional right.