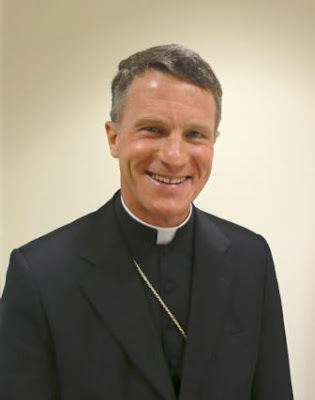 WASHINGTON, D.C. – His Excellency, the Most Reverend Timothy P. Broglio, J.C.D., Archbishop for the Military Services, issued the following statement as the Nation celebrates its birth on the 4th of July.

“The liberties enshrined in the Bill of Rights represent a precious treasure for all of us. We know that those liberties have been challenged often in our 236 year history. On Independence Day we celebrate that we are a Nation of the people, for the people, and by the people. Gratefully, we celebrate not only the courage and the insight of the patriots of the past, but also the continued dedication of the many Americans who serve our Country.

"Part of that service is the ability to preach the truth. As we conclude the Fortnight for Freedom, we reaffirm our commitment to preach the truth in love. To be able to do so we must enjoy the freedom of conscience, given to us by Almighty God and recognized by the U.S. Constitution.

“Our liberty is not cheap. It requires vigilant leadership and men and women of faith who are capable of challenging those who would compromise that priceless liberty. I am reminded especially of those for whom I am called to care and their sacrifice for our continued freedom.

“We recognize our debt to these brave men and women of the Armed Forces and their families and the Archdiocese for the Military Services strives to meet their needs along with those of the Veterans and the young people preparing for service in one of the military academies.

“Our prayers and quest for peace are endless, but we cannot fail in the mission to assure that men and women in uniform have access to all the sacraments and the same benefits that Catholics enjoy everywhere.

“July 4th is a combination of many themes and events. However, it is an anniversary that recalls the sacrifices and the price of freedom and peace. It is a call to rededicate ourselves to what makes us a great people. It urges us to do more. It also means recognizing the immense importance that faith has had and still has in building ‘one Nation, under God, with liberty and justice for all.’”

Archbishop Broglio invites the public to pray for U.S. servicemen and women, their families, and the chaplains who help them during their deployments and afterwards.

The Archdiocese for the Military Services (AMS) was created as an independent archdiocese by Pope John Paul II in 1985 to provide the Catholic Church’s full range of pastoral ministries and spiritual services to Catholics serving in the U.S. Armed Forces, enrolled in U.S. Military Academies, undergoing treatment in Department of Veterans Affairs (VA) Medical Centers, working for the U.S. Government in civilian jobs outside of the Country, and their families.

As the nation’s only archdiocese without geographical boundaries, the AMS endorses and grants faculties to priests for on-site ministry at more than 220 U.S. Military installations in 29 countries and 153 VA Medical Centers in the U.S. American Catholic civilians work for the federal government in 134 countries beyond U.S. borders, but due to limited resources, the AMS cannot serve them adequately. Worldwide, an estimated 1.8 million Catholics depend on the AMS to meet their spiritual and sacramental needs.

For more information on the Archdiocese for the Military Services, visit www.milarch.org , the only official Web site for Catholics in the U.S. Military and for the Cause of Father Vincent Capodanno, M.M.
Posted by Father Kevin M Cusick at 4:30 PM