"Protest against 'blasphemous' play in Paris": Who decides who is "a fundamentalist Catholic"?

"Two men reported to have links to fundamentalist Catholic groups were arrested at the weekend while attempting to disable the theatre's security system." 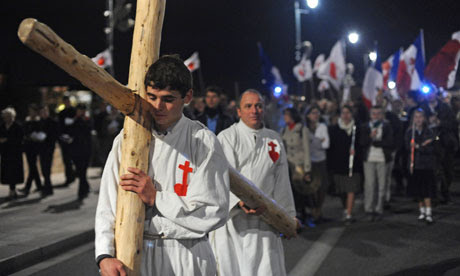 One of Paris's most prestigious theatres was being protected by riot police and guard-dog patrols on Thursday after it became the latest target in a wave of Catholic protests across France against so-called "blasphemous" plays.

The head of the Théâtre du Rond-Point on the Champs-Elysées complained of death threats in the runup to Thursday's premiere of the play Golgota Picnic by the Madrid-based, Argentinian writer Rodrigo García. Two men reported to have links to fundamentalist Catholic groups were arrested at the weekend while attempting to disable the theatre's security system.

Several Catholic groups have called for peaceful demonstrations, prayer-vigils and the laying down of white flowers outside the building every night the play is shown, while the archbishop of Paris will lead protest prayers against the play at Notre Dame Cathedral.

The demonstrations over Golgota Picnic come after a rise in fundamentalist religious protest action against some of France's most high-profile theatres, including pelting the audience with eggs, letting off stinkbombs and the invasion of the stage of Paris's esteemed Théâtre de la Ville mid-performance by outraged Catholics carrying banners reading "Stop Christianophobia".

Earlier this year, young French fundamentalist Catholics staged an unprecedented attack on a gallery in Avignon, slashing photographs including Piss Christ by the New York artist Andres Serrano. More peaceful Catholic protests outside theatres, including young people kneeling with wooden crosses outside venues from Lille to Toulouse, have led the French culture pages to question the rise in rightwing and nationalist feeling among hardline Christian groups.

Paris remains sensitive about Christian demonstrations since the fire-bombing of a cinema showing Martin Scorsese's The Last Temptation of Christ in 1988. Political commentators have speculated that some traditionalist Catholics in the demonstrations had broken off from the Front National after the leadership was taken over by Jean-Marie Le Pen's daughter Marine.

Golgota Picnic, which takes place on a stage strewn with burger buns, has several religious references including readings and a crucifixion scene. But Paris theatre critics said it was absurd to call it anti-Catholic or blasphemous and questioned whether its religious critics had actually seen it.

Yet in a move that went further than the recent protests over Théâtre de la Ville's staging of On the Concept of the Face, Regarding the Son of God by the Italian Romeo Castellucci, Paris's archbishop, André Vingt-Trois, deemed Golgota Picnic, which he had not seen, "deliberately offensive" and said he would lead a protest prayer at Notre Dame.

Jean-Michel Ribes, head of the Théâtre de Rond-Point, appealed for calm. He said: "The Théâtre du Rond-Point isn't an anti-Christian, anti-Muslim or anti-Jewish place." But he said the role of artists was to fight against "suffocating dogma". Theatregoers have been advised to arrive an hour early to get through the airport-style security before reaching their seats.

Paris city hall's art supremos rushed to defend the theatre community against what it said was fundamentalists holding art to ransom, saying a "silent minority" of Catholics did not share the notion of making threats or stifling freedom of expression.

Civitas, a lobby group that says it aims to re-Christianise France, has called for a large, peaceful street demonstration "against Christianophobia" this weekend.