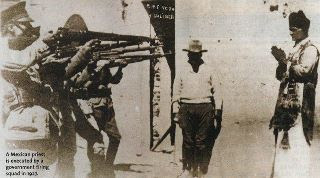 We admire the martyrs' heroism and desire it for ourselves.

There is a living death through suffering, even of the consequences of our own sins, by which we can realize each moment a heroism which God offers us though different from that of the bloody martyrs.

The resolution is put into action when the will actively anticipates and chooses to acknowledge the continued consequences of sin which arise through the memory, the imagination or the changed attitudes or reactions on the part of those wounded by our sins. One's past deficiencies of respect for the dignity of oneself and others though still potent in memory is rejected. One thus freely wills this very beautiful way to meet the Lord each day by living these moments in a manner similar to the way in which a martyr watches the bullets approach for a split second before closing his eyes on this world for the last time, his transit thus hastened to behold and adore the face of God.

Also that staunch, unflinching love which manifests itself in daily forgiveness in the face of the unremitting attacks of the incomprehending, the vengeful, the bitter, the jealous is a martyrdom which indeed experiences most acutely the pain of these bullets but refuses to respond in kind, allowing the burning love of God which is grace to melt them into fuel for the increase of the power of the burning charity of the heart aflame with the divine Presence which is love.

Through this grace the faithful heart achieves a union, a participation in the burning furnace of Divine love which is fully and truly present in the Sacred Heart of our Lord Jesus Christ.
Posted by Father Kevin M Cusick at 9:23 AM